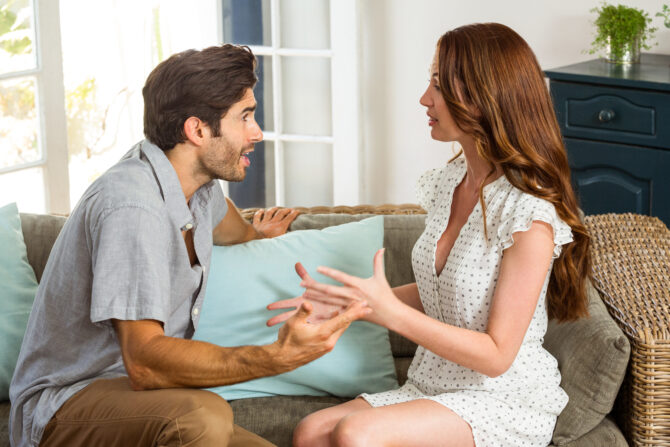 With societal acceptance of LGBTQ people growing so much in the past few decades, what happens when one member of a heterosexual marriage evolves in their views and the other one stays stuck in the past?

For one man who recently vented on Reddit about his homophobic wife, his strategy is simple — don’t back down. His post has since gone viral, racking up over a thousand (mostly) positive comments of encouragement.

As the man tells it, a family conversation about the same-sex kiss between two loving, female characters in the Disney/Pixar film Lightyear sparked a “huge fight” between him and his wife.

“My wife was explaining [the kiss scene] to my mom and I and she was huffing and puffing about it ‘not being right’ and ‘not something she wants our kids seeing,” he wrote. “She looked to me for approval and I didn’t give her any. I just said I don’t care. It doesn’t bother me what other people do and if it’s in a kids movie it’s no big deal.”

Related: Redditors rally around guy whose date pulled “the most d*ckish” move ever

The man went on to explain that, “She was born and raised in the south by very conservative Christian parents. Her opinions about homosexuality are it doesn’t matter what someone does with their life as long as she doesn’t have to see it. I was raised different. I told her I wasn’t going to teach our boys to treat people different because they do things different than us.”

The argument grew even more heated, and he said his wife got so upset she tried to shove him out of the room. That’s when he walked away to reflect.

Comments started pouring in, with people applauding him for being a good dad and standing up to his wife’s bigotry.

In an update, the man elaborated on his own shifting views:

“We’ve been married for 11 years and honestly I used to be pretty conservative. I found homosexuality gross and didn’t want to see it around me. But as the years have gone on I’ve softened that view and it really doesn’t bother me anymore. Having kids actually changed a lot of my views bc I couldn’t be selfish anymore. I want my kids to be raised well and if they come to me with a problem I want them to know that I will listen to them and support them. I don’t ever want them to feel like they have to hide their thoughts or opinions bc ‘mom and dad don’t like gays’. I want them to grow up accepting of other people.”

Related: He refused to attend his twin’s gay wedding, so why is the internet defending him?

He also said that he’s “definitely going to have further conversations with my wife on this subject.”

Finally, the man offered this message of support to the many, many LGBTQ people who left thoughtful comments:

“For all the folks that have told me their struggles in dealing with family, whether you’re gay, lesbian, trans or anything else, I just want to say thank you for being strong. Know that there’s people out there who will give you support even if they don’t know you. You all have value and that value is determined by you, not someone who thinks they can judge you. It’s always possible that negative people can change (I’m one of them), but even if they don’t, just keep being unapologetically and unabashedly you. Because you’re so worth it.”

Nearly all the commenters agreed that those kids are lucky to have him as a dad.