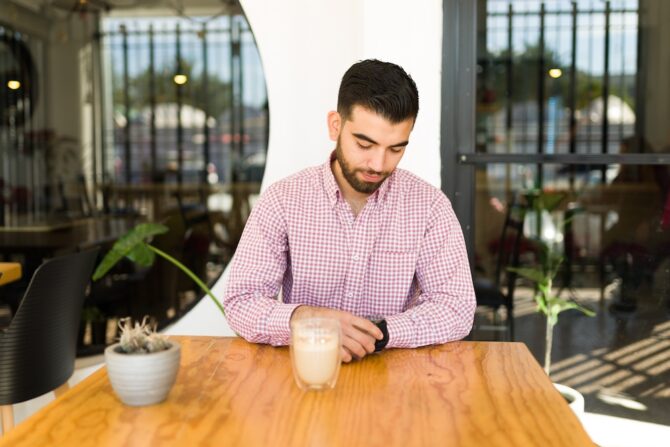 One Reddit user met Mr. Wrong online, and the way he got stood up has other Redditors up in arms. As the guy explained on the r/gay subreddit, he arranged to meet his date at a boba shop, but his date walked right by him with nary a word.

A screenshot of their text convo tells the rest of the story. In that thread, our hero confirms he’s the one wearing the gray hoodie in the boba shop. And Prince Not-So-Charming replies, “Ugh ew no thanks,” and adds cat and fish emojis.

While walking into a boba shop to meet my date today.. he sent me this then walked by me silently.. At least I still got my boba though from gay

As Grey Hoodie explained in the comments of his post, his date messaged him later on Instagram to accuse him of catfishing about his height, even though Grey Hoodie was always upfront about being 5-foot-7. “We had sent pics all week for the last two weeks. And FaceTimed almost every day, too,” Grey Hoodie added. “He ended up telling me on Instagram I ‘looked taller’ in my pics and on FaceTime.”

Related: Gay man ghosted by his date for the most ridiculous reason

So far, Grey Hoodie’s post has gotten 322 comments, with dozens of other Reddit users telling him he deserves better.

“I’m sorry you had to experience that,” one commenter wrote. “Good thing he showed his true colors right from the get-go, though, so you didn’t have to waste more time than necessary on actual human garbage.”

Another observed that this is “the most dickish way to reject someone.”

A third commenter wrote, “Yo, 5’5” here. F*ck that dude. Glad you enjoyed your boba. It’s the little things that really matter. (That’s a height pun from a sympathetic short guy to another. Get your minds outta the gutter!)”

Grey Hoodie told his Reddit supporters he was initially bummed but now realizes he dodged a bullet with this height-obsessed jerk. “I got lucky he showed himself out,” he wrote. “Wouldn’t want to be with someone that shallow and stupid.”

And on the plus side, Grey Hoodie got a great cup of boba tea out of this date-gone-wrong. “It was so delicious,” he wrote. “I got Thai tea with a milk cap and extra boba!”

Here’s hoping a better match *bubbles* to the top soon!