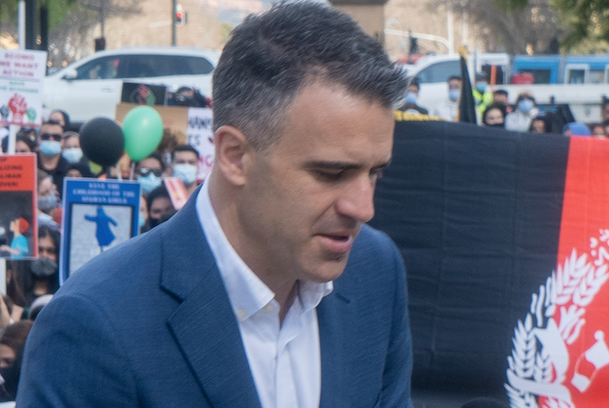 South Australia has a new premier, and the Internet appears to have a new crush.

Labor Party leader Peter Malinauskas, 41, took on the state’s top job last week, replacing Liberal leader Steven Marshall. But while there are certainly those who are happy to see Malinauskas ascend based on his policies — in Parliament, for instance, he voted in favor of marriage and adoption equality for LGBTQ people — many have taken to social media to praise his other attractive qualities.

In February, Malinauskas appeared for a photo op at the Adelaide Aquatic Center and decided to take a dip in the pool. Seems like a pretty reasonable thing to do.

The photos made headlines at the time after then-Premier Marshall criticized him for spending too much time working out, and vowed to cut carbs in response.

Premier Steven Marshall has delivered a jab at opposition leader Peter Malinauskas after his opponent was snapped shirtless at a press conference over the weekend. #9News pic.twitter.com/cUiHY7t0bP

I would do all manner of corrupt things to get with a man like Peter Malinauskas! Hot damm! ? ?? #savotes pic.twitter.com/UTAYVouR6P

It’s a sentiment shared by others, it seems:

Another hot Premier voted in with Peter Malinauskas #savotes

Can Peter Malinauskas do his first presso shirtless pls thanks #SAVotes

It is unlikely Malinauskas will be showing much skin moving forward, however. After the images reemerged, he told ABC radio:

“Do you have any idea how much grief I’ve copped around the place as a result of that? They’ve piled it on, let me tell you. I haven’t stopped copping it, and I deserve every bit of it.

“We were announcing a big investment at our major aquatics centre here in South Australia and a whole bunch of us jumped in for a swim in our boardies with our kids there. And, yeah, it got a bit more attention than I anticipated, fair to say.”

Asked if he’s planning to keep his shirt on from now on, he replied: “d-mn straight.”