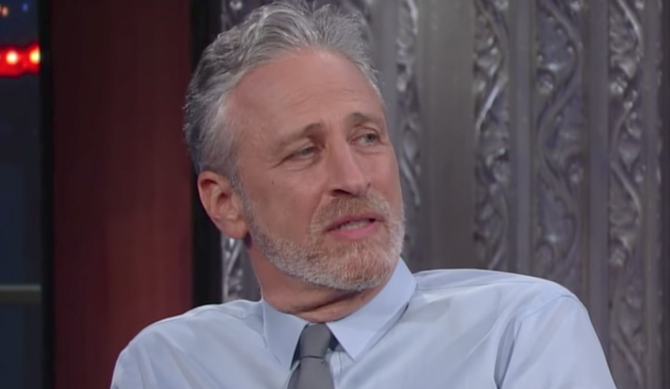 It’s been just a week since the #FireColbert non-troversy ignited on social media in response to Late Show host Stephen Colbert’s crass joke about Donald Trump‘s relationship to Vladimir Putin.

And since then, well, nothing has happened, unless you count a boost in Colbert’s ratings.

Why? Well first of all, the entire hullabaloo turned out to be largely drummed up by right-wing provocateurs. And then there’s the reality that Colbert is a comedian, and comedians tell jokes. Is there an argument to be made that this particular joke was over the line? Sure, but now we’re talking about a line comedians aren’t allowed to cross, and we promise that scenario doesn’t end well when drawn out.

Related: Jim Parsons to Stephen Colbert: “Are you feeling homophobic?”

None of this was lost on Stephen’s guest and former boss, Jon Stewart.

“I’m not comfortable here. I don’t feel comfortable,” Stewart said as he sat down on Stephen’s couch, irony at high-alert.

“I am perfectly comfortable,” replied Colbert.

“That I do, but might I say,” Colbert quipped back, “I learned it from you, Dad.”

They made up with a kiss: 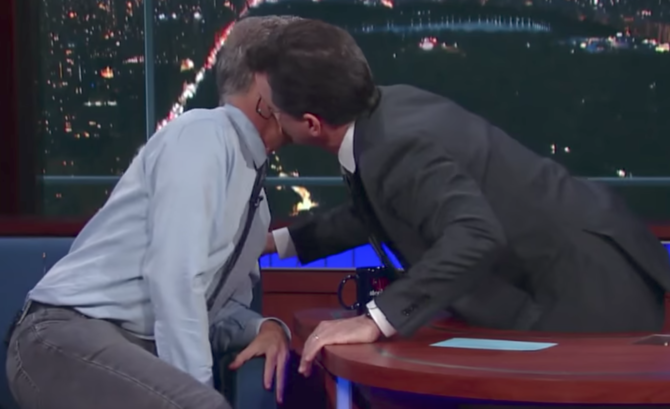 Later in the conversation, Stewart offered a broader, more sincere take on the events, which one week later already feel like a fuzzy, distant memory:

“The things that you say, even if they’re crass, even if they are in some way not respectful enough to the office of the presidency — we can insult, he can injure. It’s the difference between insult and injury, and I, for the life of me, I do not understand why in this country we try and hold comedians to a standard we do not hold leaders to. It’s bizarre.”

Related: Stephen Colbert addresses #FireColbert controversy: ‘I would do it again’