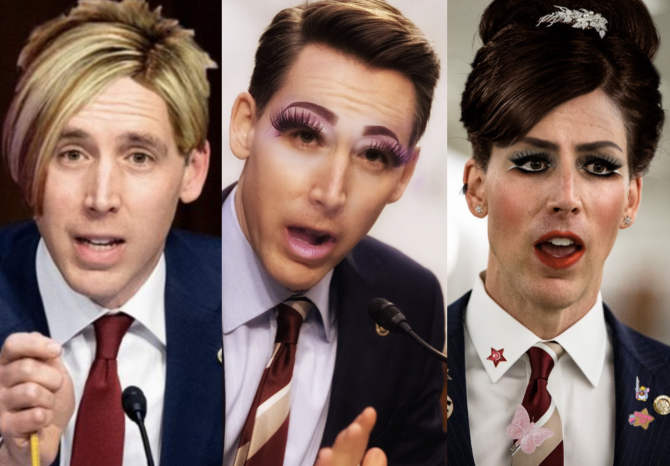 Sen. Josh Hawley is currently getting a drag makeover on Twitter after he decided to make it his personal mission to be the voice for marginalized straight white cisgender males in America.

Then over the weekend, he told “Axios on HBO” that he plans to make toxic masculinity a signature political issue because far too many people on “the left” are telling good guys like him: “You’re part of the problem. … Your masculinity is inherently problematic.”

In response to Hawley’s weird new obsession with protecting the sanctity of masculinity in America, political strategist Rick Wilson, co-founder of The Lincoln Project, tweeted this morning: “I hope no one photoshops Josh Hawley in drag makeup. That would be totally wrong for the champion of American masculinity. Totally. Wrong.”

I hope no one photoshops Josh Hawley in drag makeup.

That would be totally wrong for the champion of American masculinity.

I would never.
Never. pic.twitter.com/UF0IjKu7Ab

Now Josh Hawley is going to have to call the manager pic.twitter.com/Bicu9c4tu3

Here are two. One also has a bonus character. 🍊 pic.twitter.com/UKLAkA30Uz

Here ya go Rick. It’s the best I could do on a rush job. pic.twitter.com/cQdhp4cWt6

Priscilla, Queen of the Senate pic.twitter.com/jsPTXyZqvm