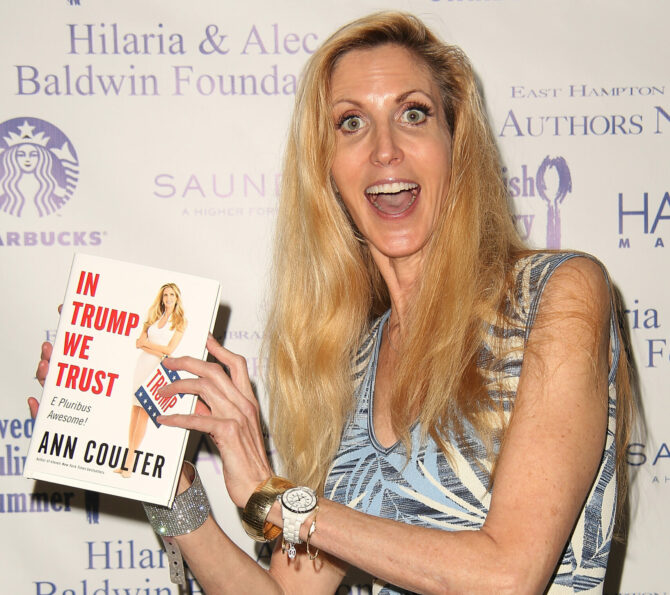 Ann Coulter has broken up with Donald Trump again… again.

In her latest podcast, posted to her Substack, the 60-year-old Republican troll declares the ex-president “done” and says his influence over the GOP is waning, citing his dwindling poll numbers and shrinking crowds at his rallies.

“They’re like Deadheads,” Coulter calls people who still attend MAGA rallies. “They’re following him from place to place. He sings the same songs.”

Ironically, in 2016, she published In Trump We Trust: E Pluribus Awesome!, a 221-page love letter to the disgraced businessman that is currently being discounted by almost 80% (plus a $0.50 credit!) on Amazon.

Last year, Coulter expressed regret over the book, saying “Trump betrayed his own supporters at every turn … I hate him. He’s a betrayer.” We’re guessing she doesn’t regret the money she made off it, though. (Prior to the 78% discount, we mean.)

In January, she made similar remarks to the New York Times, saying: “Trump is done. You guys should stop obsessing over him.” She also called him “a liar and con man whose grift was permanent.”

In this week’s podcast, Coulter also says the loyalty among Trump “fanatics” is not “indicative of a movement sweeping the nation.” And she encourages people who have abandoned the party because of him to “come back.”

“Republicans, it’s not the party of Trump,” she says. “It’s safe to come back, and it’s safe for Republicans to stand up and run without Donald Trump.”

Hmmm. We have a feeling representatives like Jaime Herrera Beutler of Washington, Peter Meijer of Michigan, Tom Rice of South Carolina, and Liz Cheney of Wyoming might beg to differ. All four Republicans voted to impeach Trump, and all four lost their primaries as a result.

And about those primaries, Coulter also accuses Trump of making last-minute endorsements of candidates who were already poised to win their races as a way of taking credit for the victories and giving the illusion of influence.

Giving credit where credit is due, she might actually be right about that last point. But you know what they say about broken clocks.

Ann Coulter just put out an article saying “Trump is done.” Laura Ingraham said it’s time to “move on” from Trump. Ben Shapiro said Republicans need to stop “talking about Trump.” The establishment is turning on him before his indictment. Rats scurrying off the sinking MAGA ship.

How many times has Ann Coulter "turned on Trump" when her name hasn't trended for awhile?

Ann Coulter is not a serious thinker; she is an opportunist.

She used Donald to make money.

And now she sees the writing on the wall: She's going to have to find something else to pretend to care about to make money.

But as a political weathervane, her 180 isn't good for Trump pic.twitter.com/krs4u1dCEM

When your midterms are turning into Trump steaks.

A reminder that Ann Coulter is only bashing Trump because she thinks he isn’t racist enough. Let’s not sing her praises. She is vile.

The thing that annoys me about folks like Ann Coulter is they're actually really smart people who chose to intentionally play into bigotry for money and fame. Then, shift gears, when the gravy train starts to dry. https://t.co/VnayNIzeuc

Ann Coulter saying Trump is done is like Mitch McConnell saying maybe Trump went too far. It's too little, too late. You did the damage when it mattered to your bottom lines – you're forever tainted.

Ann Coulter is a perennial grifter and provocateur and will say just about anything to get attention and monetize off of it.

Agreeing with Ann Coulter hurts my soul. I prefer to remember her as that racist who decided to show up to a roast full of left-leaning entertainers.

Here are some of the best insults from Rob Lowe's roast.pic.twitter.com/qkf2plceeK

Related: Ann Coulter is losing it on Twitter right now over a bunch of gay guys singing