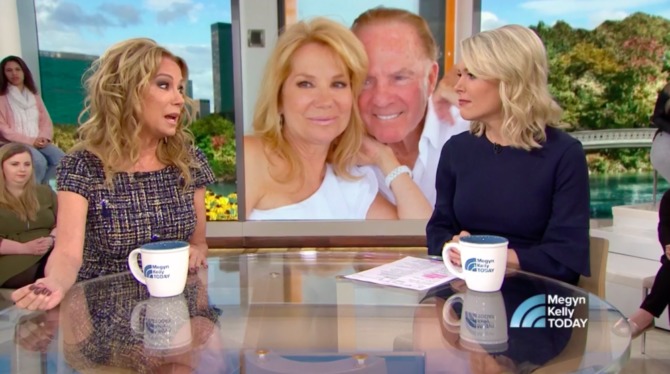 This just in: NBC execs are so desperate to save Megyn Kelly’s tanking morning show that they’re literally calling upon the power of the Lord to try and help.

This morning, Kathie Lee Gifford appeared on Kelly’s show where the women chatted about… Jesus.

In case you didn’t know, in addition to her gig as Today show host, Kathie is also an accomplished recording artist. She’s released six studio albums, a Christmas album, and a “super hits” collection over the years. She’s also appeared in a number of musical theater productions.

Related: ‘A bad smell’: None of ‘toxic’ Megyn Kelly’s NBC coworkers want anything to do with her

Megyn asked Kathie about the inspiration behind her new single “He Saw Jesus,” which is dedicated to Kathie’s late husband, Frank, who passed away two years ago at age 84.

“I was able to hold my husband in my arms and cry tears of rejoicing for him,” Kathie said as she recalled her final moments with Frank. “It’s a happy song and gives a lot of hope.”

The song was released earlier this week and hit #1 on Billboard‘s Christian Digital Song Sales, with 5,000 downloads sold, a pretty impressive number in the era of online streaming.

“I’ve been in this business 50 years, I have my first hit record,” Kathie told Megyn in disbelief. “And it’s about Jesus!”

Related: An ‘all-time low’: The bad news just got even worse for Megyn Kelly

The last time Kathie appeared on a Billboard chart was 17 years ago, when her album Heart of a Woman peaked at #170.

Watch Kathie perform her new song on the Today show…