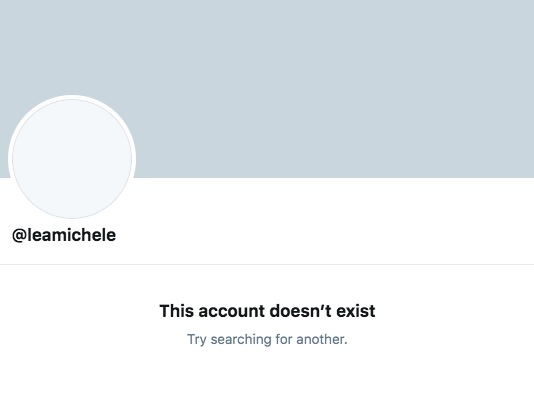 It’s been a rough couple of weeks for actress Lea Michele.

After being accused of bullying by former Glee co-stars Samantha Ware, Amber Riley, and Alex Newell, scores of other former cast mates, colleagues, understudies, and extras came forward to accuse her of being “subhuman,” “terrifying,” “manipulative,” and a “nightmare,” among other things. It seemed like every week someone else with close ties to Michele had something absolutely terrible to say about her.

Related: Another one of Lea Michele’s former co-stars just spilled a whole pot of tea

Michele issued an apology in early June before going into hiding. Then on Saturday, she quietly deactivated her Twitter without saying a word.

Fans quickly began speculating over the reason why Michele left Twitter, with the general conclusion being it had to do with the reports of bullying paired with fellow Glee alum Naya Rivera’s sudden disappearance.

Rivera was reported missing last week after her 4-year-old son was found alone on a boat in the middle of Lake Piru, approximately 50 miles north of Los Angeles in Ventura Country. Authorities suspect the actress drowned in a tragic accident.

lea michele deactivated because people were commenting on her posts “it should’ve been you instead of naya” y’all are fucking sick.

Listen, you don’t have to like Lea Michele especially after she treated her costars bad, but to go on Twitter/Instagram and harass her by wishing it was her instead of Naya Rivera doesn’t make you any better of a person. Use that energy to pray for Naya.

the people that made lea michele delete her twitter by harassing her & accusing her of naya rivera’s disappearance are disgusting. hate her all you want but that is too much. they knew each other for eleven years, she will be affected by this regardless of their past conflicts. pic.twitter.com/DJF967kOxH

Lea Michele deactivated her Twitter after y’all’s hate on her. Saying it should’ve been her instead of Naya Rivera? that’s just disgusting. It should’ve been no one, no one (‘s family) should go through this. Not Naya(‘s) nor Lea(‘s). Get some respect #NayaRivera

There are people telling Lea Michele she should have died instead of Naya. This is utterly disgusting, not only because she is heavily pregnant but because it’s been 7 years since she lost Cory. She and Naya weren’t friends, but she doesn’t deserve to be bullied like this pic.twitter.com/TTD7nthCxQ

Over the years, it was widely reported that Michele and Rivera didn’t get along while working on Glee.

In 2016, Rivera confirmed the rumors were true, albeit overblown, telling E!, “We are both strong willed and competitive—not just with each other but with everyone—and that’s not a good mixture.”

Recently, however, the two seemed to have let bygones be bygones. In April, after Michele announced she was pregnant on Instagtam, Rivera commented, “Aww congrats! I love this. You’re going to be a great mommy.”

Michele’s Instagram page remains active, though she hasn’t posted anything new since her June 3 apology.