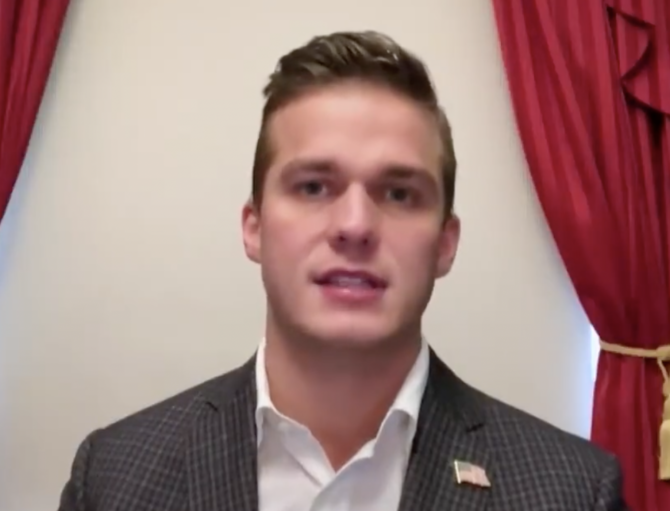 Madison Cawthorn appears to have been thoroughly humbled and humiliated by his embarrassing primary defeat last month. So much so that he’s begun distancing himself from his old buddy Donald Trump.

The disgraced, outgoing, single-term congressman now believes the ex-president created a “dangerous setting” outside of the U.S. Capitol on January 6, 2021.

In a recent interview on The Carlos Watson Show, Cawthorn was asked if there was anything he wishes he’d done differently when he spoke at Trump’s “Stop the Steal” rally the morning of the insurrection.

Replied Cawthorn, “Well, you know, one, I mean, you know, President Donald Trump said, ‘I want you to peaceably and patriotically protest,’ — that’s good on his part. But if I could go back, I probably and I had an opportunity to speak with the President, which I did not, I would have asked that he did not send or tell the crowd to go down to the Capitol.”

“You know, I think that that just put everything in a dangerous setting.”

Cawthorn went on to say that if he had a “crystal ball” and could change his own speech at the rally, he would have urged the MAGA militia to be more peaceful. Instead, of course, he told them to “fight”, saying, “We’re not doing this just for Donald Trump, we are doing this for the Constitution!”

Reflecting on January 6th, Madison Cawthorn said when Trump sent the crowd to the Capitol it “put everything in a dangerous setting.” pic.twitter.com/2OSkuxQ8Vw

This is a much different perspective than Cawthorn had back in February 2021, when he went on The Carlos Watson Show to say he had absolutely no regrets about what happened on January 6 or the violence that ensued at the Capitol, in which five people died.

“I don’t regret it, actually, Carlos,” Cawthorn told Watson at the time. “When I did go speak at that rally, I was specifically trying to get across to the people that, ‘Hey, I am in Congress, I am going down to the Capitol right now to speak on your behalf.'”

BREAKING: Disgraced, defeated GOP Rep. Madison Cawthorn finally turns on his cult leader Donald Trump, says that he shouldn't have sent his Jan. 6th mob to the Capitol because it "put everything in a dangerous setting." RT IF YOU THINK THAT TRUMP IS TO BLAME FOR THE INSURRECTION!

Cawthorn’s career is over, he might as well tell the truth.

I thought they were just loving tourists with flowers and well-wishes for a safe democracy.

So like other appendages, his balls are purely ornamental

A little too late. Is he a RINO now?

Sez the guy that helped create the monster he now rails against.

Does that mean he fears legal repercussions for his role?