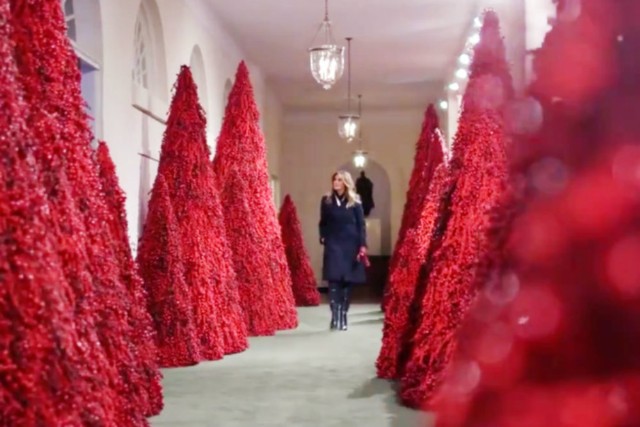 First lady Dr. Jill Biden may have ended Melania Trump‘s war on Christmas when she welcomed an 18-foot Fraser fir tree to the White House last week, but the ex-FLOTUS isn’t going down without a fight.

Melania’s infamous blood trees will once again be on display at a Donald Trump fundraiser later this week. For $10,000 per person (or $30,000 for a family of four), people can pose for one (just one!) selfie alongside the ex-president in an airport hangar that will be decked out in holiday decorations inspired by his wife’s Christmas hellscape.

The fundraiser is being held in Naples, Florida on December 3 and will feature 100 trees that “will re-create Melania’s Yuletide decoration of the White House,” according to the New York Daily News. It’s unclear what the fundraiser is exactly for, but organizer Brad Keltner assures that the money will go to “charity.”

“This is not a political fundraiser,” he said. “The president is doing this to benefit several local causes in a community that strongly supports him.”

Asked whether the ex-president, who is currently facing nearly a dozen lawsuits, will be taking a cut of the money raised, Keltner replied, “Trump does get a piece of the pie, but the lion’s share will go to charity.”

Between 90 and 250 people are expected to attend the event. One person who seems particularly excited about it is Trump’s former press secretary Kayleigh McEnany, who tweeted: “One of my favorite White House memories was the beautiful Christmas Party!”

One of my favorite White House memories was the beautiful Christmas Party!

Here’s what people are saying about the whole thing…

An Evening of Moneymaking with Donald Trump

I just threw up in my mouth a little

Notice there’s no venue. Anywhere on the page. Event in two weeks, and no way to tell where it is other than “Naples, Fl.”

This is a joke right?

Tickets STARTING at $10 thousand….for one person, and one picture with TFG. Does this grift ever end? pic.twitter.com/vkhqBYidUg

But if need to egotistically self indulge ..