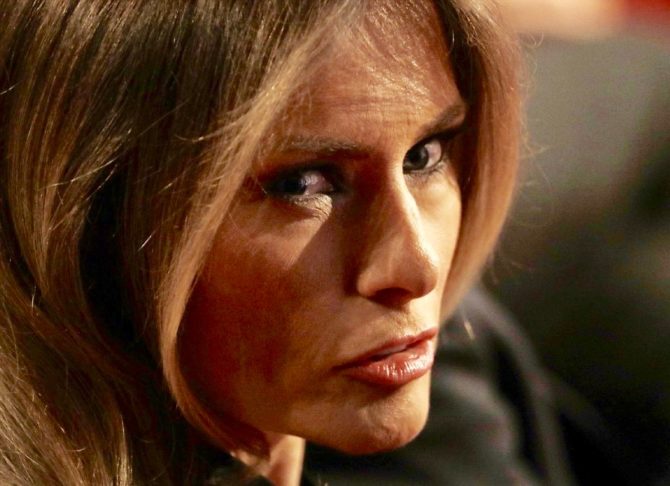 Melania Trump‘s platform as First Lady is combating online bullying… against herself and her family. She’s currently embroiled in two multi-million dollar libel lawsuits against people who she feels said mean and untrue things about her on the internet.

One of the outlets the First Lady is suing is the Daily Mail over a story it published last year suggesting she had once worked as an “escort.” The story covered Melania’s journey from Europe to New York in the mid-1990s and claimed that she became connected with a wealthy New York entrepreneur shortly after arriving in the Big Apple, who allegedly operated an escort agency for wealthy clients, which she may or may not have worked for.

Immediately upon the story’s publication, Melania’s team put out a statement saying the claims were totally “false” and insisting she only “did legitimate and legal modeling work for legitimate business entities and did not work for any ‘gentleman’s club’ or ‘escort’ agencies.” Then she filed a libel lawsuit against the publication.

Now, here’s where it gets weird.

Melania filed the lawsuit in Maryland. Her lawyers argued that the company’s advertisements target users in the state, and so filing the suit was proper. In response, the website’s parent company, Mail Media, filed a motion to have the case dismissed on the grounds that it wasn’t filed in the proper jurisdiction. (Both the Daily Mail and Mail Media are based in the U.K.)

“[T]here is nothing about the parties that connects the case against MMI to Maryland–MMI does not have an office in Maryland, Plaintiff does not live in Maryland, and the witnesses are not located in Maryland,” Burrell wrote in her ruling. “It would be unreasonable as a matter of constitutional due process for this Court to exert jurisdiction over MMI or MailOnline in the State of Maryland.”

Melania’s other libel lawsuit, the one demanding $150 million from blogger Webster Griffin Tarpley, however, will proceed in the Maryland Circuit Court, since Tarpley lives in Maryland.

The First Lady’s attorney Charles Harder has not yet commented on the ruling, though we’re sure she won’t be going to give up that easily. After all, a source close to Melania told US Weekly this week that she is “very much embracing the role and responsibilities of First Lady,” of which online bullying is her top priority.