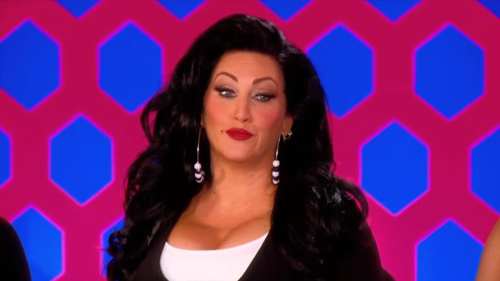 Michelle Visage sprung to the defense of pal RuPaul following this month’s Drag Race UK drama, and she did not mince her words.

On an episode of the British spin-off series, Ru strongly critiques competing queens Tia Kofi and Joe Black on their looks, saying he expects more after coming “all the way across the pond.”

“Is that asking for too much? I don’t think so. It’s the biggest stage for drag in the world. This is the Eurovision of drag,” he he added, also signaling out Joe for wearing an unaltered H&M dress down the runway.

“I don’t want to see any f*cking H&M” instantly got the meme treatment online, with the clothing brand even jumping on the exposure and sending Joe a cake with this message on it: “Roses are red, violets are blue, we loved your fit, don’t listen to Ru!”

Ru later apologized, saying: “I want you to know that if I was little too hard on you earlier, it’s because I see so much potential in each of you. And if nothing else, these times have taught us to seize the day. Carpe diem, darling!”

“Look around you, look at the past winners, look at what you are doing right now and make it happen. Plus, Mama Ru was locked up in quarantine for two weeks, so that might have a little something to do with it…”

That wasn’t enough for some of the show’s viewers, who struck out at the Emmy award-winning host on Twitter.

“Let’s applaud someone for being rude to people who can’t afford couture handmade gowns in a pandemic. Remember when Michelle and Ru were wearing haute couture in the 90’s…. oh wait,” wrote one commenter.

“Hold up,” she responded. “This has NOTHING to do with money. At all. Ever. You do NOT get to turn this into YOUR narrative.”

Visage also popped in to validate somme comments she agrees with.

Hold up. This has NOTHING to do with money. At all. Ever. You do NOT get to turn this into YOUR narrative https://t.co/FnM0MliOPO