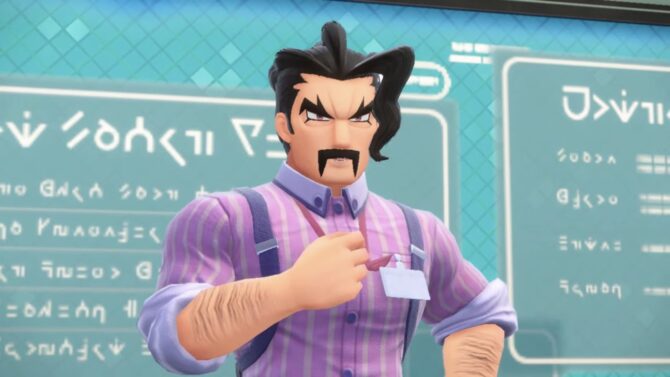 You know the thirst is severe when “prime daddy meat” is one the tamest descriptions.

Nintendo’s latest Pokémon Presents announcement featured a rugged new character for their upcoming games, Pokémon Scarlet and Pokémon Violet, and the gays were immediately down bad.

The man flashed across screens in a messily rolled-up button down, with thick arm hair and a mustache to die for.

The character is currently unnamed, but that didn’t stop folks from calling him every possible nasty thing under the sun.

This hunky set of pixels was objectified by everyone from work-unsafe artists to Drag Race queens:

Who is he and is he into pits? pic.twitter.com/6Sk9AsyVDy

Look at this man, prime daddy meat; he is giving me wrestling coach vibes, and I am here for it, I cannot wait to see the vast amount of lewds, from him and MC, to him and Turo, to him and well every fighting humanoid type Pokémon pic.twitter.com/dMamdMC2T4

Idk if he’s a gym leader or not but if he torn me in half I’d thank him 🙈 pic.twitter.com/CLwC7vUBC6

Can we talk about this hot fucking Daddy In the new pokemon game? Fuck me 🤤🤤🤤 #PokemonScarletViolet pic.twitter.com/I77Izv7lJt

thinking about all the ways I’d get sent to detention pic.twitter.com/aD0ox0napG

this man has a harem of bottoms that follow him around #Pokemon pic.twitter.com/YXP6zrkPHH

The artists have already started busting out pin-up portraits of this mystery man, with even more explicit depictions to be found if you dig deep enough.

Who knows what’s in the water over at GameFreak that has them making so many hot men in Pokémon recently, but fans are ready to catch them all.