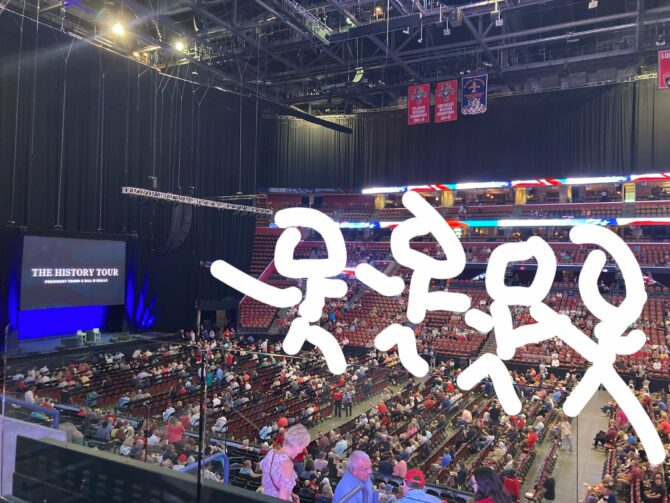 Donald Trump and Bill O’Reilly kicked off their “History Tour” in Sunrise, Florida over the weekend to a mostly empty stadium. Despite promising “big crowds,” the ex-president and fired Fox News host’s joint speaking engagement didn’t draw quite the fanfare they had promised.

Tickets to the event, which was held at the FLA Live Arena, home of the Florida Panthers NHL team, ranged from $100 to $7,500. (Yes, $7,500.) According to the Sun-Sentinel, “many seats remained empty in the cavernous arena. The top-level was closed, and ticket buyers were ‘upgraded’ to the lower bowl.”

But even with “upgrading” seats, there were still a “substantial amount” of empty floor-level seats.

This should give you an idea- I don’t have an estimate. Each person paid $138 or more – some people paid thousands for VIP access. pic.twitter.com/i43Zr2FB5h

Despite a much smaller crowd than advertised, the Sun-Sentinel says the MAGA loyalists that did turn up were in high spirits, sporting their “red baseball caps” and “favorite Donald Trump T-shirts.” And, of course, not wearing masks.

Afterwards, Trump issued a statement saying that everyone had a “great time” and that attendance was so awesome that he might hold another event at the same exact venue in the “not too distant future.”

On Sunday, Trump and O’Reilly made a second tour stop, this time at The Amway Center in Orlando, Florida, home to the Orlando Magic basketball team, where tickets sales appear to have been even worse.

Lots of Patriots here in Orlando for the History Tour with President Trump and @BillOReilly ?? pic.twitter.com/S4Q3C7wgHE

Last week, Newsweek reported that hundreds of tickets for tour stops scheduled in Houston and Dallas were still available. After they first went on sale back in June, Politico reported that they weren’t selling as quickly as expected.

O’Reilly responded at the time by threatening the reporter: “You put one word in there that’s not true, I’ll sue your ass off and you can quote me on that. You’re just a hatchet man and that’s what you are!”

The History Tour with Trump and O’Reilly shows the history of lack of crowds. Photos @SunSentinel @voxdotcom pic.twitter.com/zSJ52kOSeQ

It’s different when they don’t get paid 🤣

So many empty seats at the Trump/O’Reilly “history”event they actually had to close off large sections of the arena. Bigly. Sad. pic.twitter.com/w9brANsJVO

“I’m very pleased to see you are human, and you are at least open minded enough to listen. I’m going to try to change my opinion and think that they’re not all monsters,” Kay Peters, 95, says of journalists. Covering the Trump- O’Reilly History Tour in Sunrise. pic.twitter.com/NbzchYGiOl

In their defense, a lot of people would have come if they weren’t dead, or on respirators.

The opening night of the #DonaldTrump and #BillOReilly tour was a complete failure. Good. pic.twitter.com/6PzUMTB08x

Trump: "Big crowds!"
The Trump and O’Reilly Misery Tour is off to a great start.
The top level was closed and ticket buyers were upgraded to the lower bowl.
Because it’s empty. pic.twitter.com/1xFcsn3Ceu

Think the venue got paid in advance?

Womp Womp
Donald Trump's event with former Fox News host Bill O'Reilly on Saturday had so many empty seats that organizers closed the top bowl of the stadium. pic.twitter.com/OZ0WYNNVtB