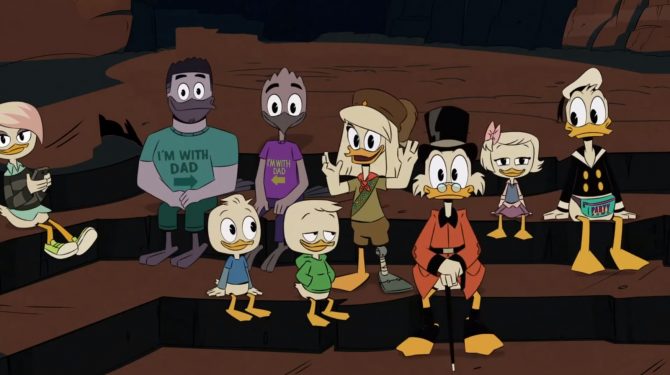 They’re at it again.

Noted muckraking hate group One Million Moms has targeted its latest object of outrage: the Disney series DuckTales, which recently featured a pair of gay dads.

The episode aired last month on Disney XD, and introduced Uncle Scrooge, Huey, Dewey and Louie to the adoptive parents of their friend Violet–two mallards. Each wears an adorable shirt with an arrow pointing under the caption “I’m With Dad,” just so everyone got the message.

The episode initially met with wide praise before One Million Moms had to spoil the party. “WARNING! DuckTales is not the same cartoon parents grew up watching,” the group wrote on its website. “It is apparent that this particular producer is not finished with indoctrinating children by exposing them to homosexual relationships through a facade of normalcy. If anyone still has any doubt on where Disney stands on this controversial issue, hopefully this makes it clear that there is an LGBTQ agenda they are forcing on young audiences.”

Predictably, One Million Moms has also launched a petition and attempted to start a boycott of Disney over the episode. This is not the first time One Million Moms has taken aim at Disney. Last year, the group criticized Marvel for including a gay couple in the upcoming film version of The Eternals. It also attacked Disney over implied gay characters in Toy Story 4 and Disney subsidiary ABC for including queer characters in The Connors. The group also infamously threatened a boycott of JC Penny after the retailer hired Ellen DeGeneres as its spokesperson.

One Million Moms began as a veneer for the fundamentalist Christian group The American Family Association as a proxy for attacking queer rights and visibility in the media. Contrary to what the group name implies, it has only a few thousand members, many of them male.