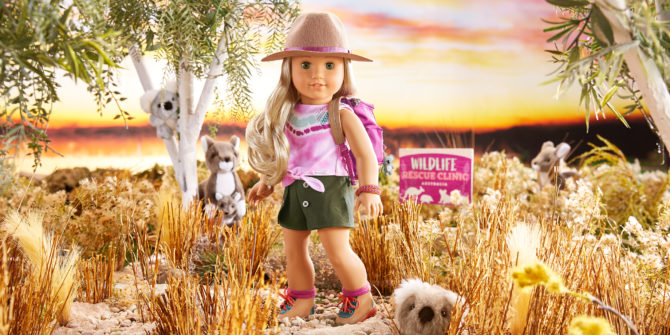 Hysterical homophobes One Million Moms have cried foul yet again. This time, the group has targeted the popular doll line American Girl over the inclusion of a new character, Kira Bailey, for having gay aunts.

American Girl already named Kira ‘2021 Girl of the Year.’ Her fictional biography states that the 10-year-old comes from Michigan and loves animals, enough so that she has started her own petition for wildlife conservation. A book that accompanies the doll further expands on her backstory, and includes a visit to a wildlife refuge run by her lesbian aunts, Mamie and Lynette, who live in Australia. The book also notes that Mamie & Lynette got married in 2017 when the nation extended equality to same-sex couples.

So then, naturally, One Million Moms has started a petition to have the doll and her aunts pulled from sale.

“As Christians, we know that even though something is legalized doesn’t make it moral or right,” the group wrote on its website. “American Girl, owned by Mattel, first made its announcement in a press release revealing that their dolls are designed to reflect the present time with ‘contemporary characters that inspire children.’ Why can’t the toy manufacturer let kids be kids instead of glamorizing a sinful lifestyle? American Girl is confusing our innocent children by attempting to normalize same-sex marriage.”

“The doll company did not even include a warning so parents would have a heads-up,” the group continued. “Within the first few pages of Chapter 1, Kira Down Under includes an illustrated picture of the two women walking down the aisle at their wedding. This irresponsible storyline is dangerous to the well-being of our children.”

At the time of this writing, the petition has nabbed just over a paltry 29,000 signatures–a sad figure for a group with “one million” in its title. Then again, nobody should be surprised: One Million Moms has never boasted more than a reported 100,000 members. The group also has a nasty history of homophobia, having pushed a boycott of retailer JC Penny after adopting Ellen DeGeneres as its spokesperson, criticized comic book publishers Marvel and DC for including LGBTQ characters, and attacked The Hallmark Channel for running a commercial featuring a same-sex wedding. The group also has a record of failed campaigns against movies and television which include queer characters, having attacked DuckTales, Toy Story 4, Hallmark Christmas movies,  and the sitcom The Connors in recent years.