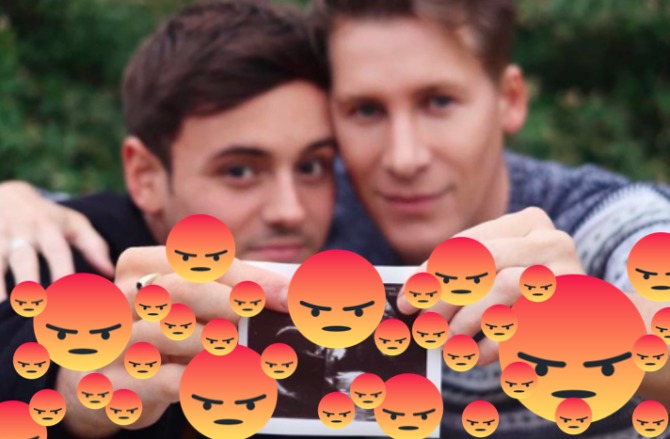 So yesterday Tom Daley and Dustin Lance Black announced they’re having a baby.

A very happy #ValentinesDay from ours to yours. ?????

Well, apparently not everyone thought so. In fact, many on Twitter went out of their way to express their regret…

Tom Daley announces he is expecting 1st child. How was it conceived Tom did ur “husband” ram hus cok up ur arse deposit sperm in ur rectum is that how we conceive kids these days? Your NOT a mother or father your a FAIRY who is being given a child like it was a pet dog

Behind the ultrasound photo brandished by Tom Daly & Dustin Lance Black is a hard-up woman abroad who has been pumped full of hormones & who has signed a contract giving away basic rights to her own body, including choices of food, drink & meds. #misogyny #stopsurrogacynow

I have no issue, with anyone's sexuality. How people and with who, they choose to live their life with, has nothing to do with me. But what i find ridiculous is, Tom Daley coming out yesterday saying, we are having a baby. Not what he said how he said it , he can't give birth.

Correction: Tom Daley and Dustin Lance Black announce that they have bought a baby. The couple have bought a baby taking advantage of their economic privileges on a woman who, undoubtedly, does it by her own choice and not by necessity.

Who took it up the bum then

"Tom Daley and Dustin Lance Black announce that they're having a baby: " No they aren't. #Biology

you could have adopted a parentless and instead have chosen to be part of an industry that exploits women's bodies and uses babies as a product to be paid for.
Disappointed to say the least.

LOL @ not being allowed to form a negative opinion of Tom Daley without being called jealous or internalising homophobia. Personally I just think he's as dull as dish water and thinks we care more about his relationship than we do.

Well, jeez! We know who’s not being invited to the baby shower!

Luckily, not everyone was quite so anti-congratulatory for the beaming dads-to-be…

Today many straight angry lonely dickheads get pissy over a married gay couple having a child.#TomDaley #DustinLanceBlack

Tom Daley has been slagged off by gay men for the following:

Gays are sometimes the worst

seen loads of ppl hating on tom daley & dustin lance black having a baby? u do realise that straight couples also have surrogacies too right? stop being homophobic you weirdos

All jokes aside, the news about about the Tom Daley & DLB baby shows just how many homophobic bastards are out there waiting to boil over with rage at any given moment.

I swear Tom Daley could save a family from a burning building and people would slag him off and say he did it for attention. Oh, and internalised homophobia is so 2008 btw.

Gay men will argue that the reason they hate Tom Daley and DLB is that there's more interesting gay men in the media to idolise. Those same gays idolise Kim Kardashian and Paris Hilton.

If you’re the kind of brainless fucking simpleton who asks, “Why do you still need Pride?” you should maybe have a look at some of the horrific takes on the news that Tom Daley and Dustin Lance Black are to start a family.

That’s why. Because of that.

From everyone here at Queerty, we’re sending nothing but good vibes and good luck to the dads-to-be!

Related: Tom Daley and Dustin Lance Black are bringing a third into their relationship