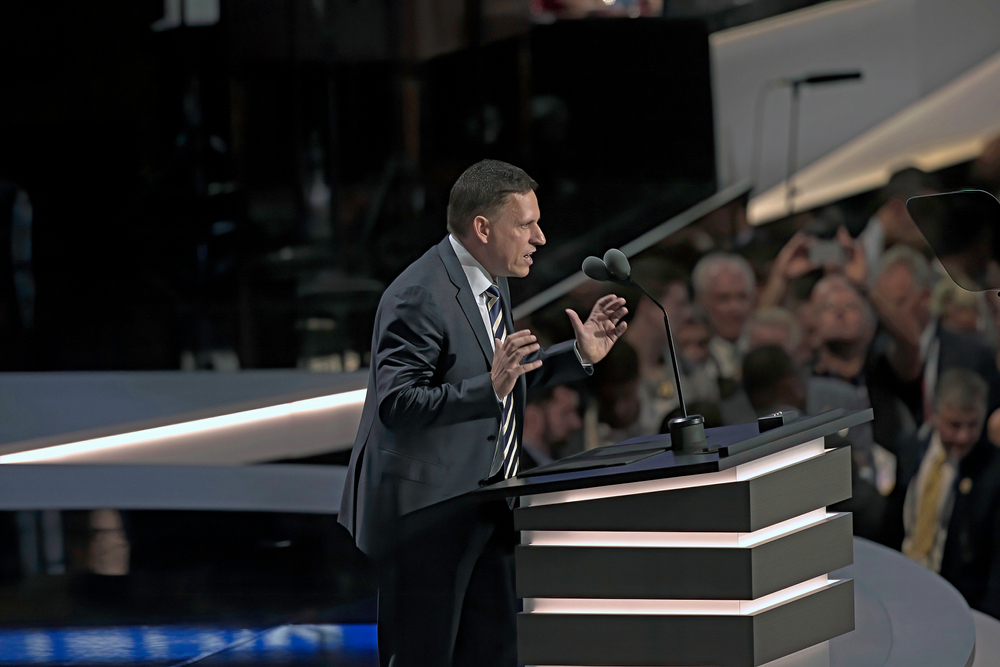 Facebook billionaire Peter Thiel may not be the first person you think of when it comes to the insurrection at the Capitol, where Joe Biden was sworn in as the 46th president today.

But thanks to his generous contributions to some rather odious politicians, he played a key role in putting the inciters in office, inevitably leading to their assault on our democracy.

First and foremost, Thiel was one of the few Silicon Valley figures willing to place a bet on Donald Trump. Thiel’s wholehearted endorsement of Trump earned him a primetime spot at the Republican national convention that year, where he praised the candidate and told the assembled crowd of right-wing party faithful that he was “proud to be gay.” (It was not exactly a big applause line.)

More to the point, at a time when Trump’s campaign was starved for cash in 2016, Thiel invested $1.25 million, making him one of Trump’s largest donors. The investment came late in the campaign after the tape of Trump boasting about sexual assault became public.

Thiel’s argument was basically that people should be taking Trump seriously but not literally and that he was not as bad as the other candidates. All along, however, Trump has been a literalist. He would have gladly sacrificed his own vice president to the mob if he could have stayed in the White House.

Thiel was also partly responsible for the presence in the Senate of Ted Cruz, who fueled the lie that the election was rigged even after the insurrection.

Thiel was the largest donor to the super PAC that was instrumental in helping Cruz secure the GOP senate nomination in 2012. When Cruz started his campaign, he polled in the low single digits. Thanks to the investment of wealthy donors like Thiel, he was able to score an upset.

And it’s not just Cruz. Thiel also made the maximum possible donation to Josh Hawley’s campaign for Senate in 2018. He had already given Hawley $300,000 two years before for Hawley’s run for Missouri attorney general. (Hawley is one of the most ardent religious right figures in public office, and Cruz’s counterpart in insurrection baiting.)

Trump, Cruz, and Hawley have all been branded as the lead inciters in the Capitol insurrection. They are in office, at least in part, thanks to Thiel’s financial backing.

This isn’t to say that Thiel underwrote the insurrection. He just bankrolled the politicians who inflamed the crowd with lies about the election.

But as a reminder, Thiel is no fan of the democratic system. He has said in the past he doesn’t believe freedom and democracy are “compatible.” He’s not a fan of the press either, despite his appearance on Fox’s Tucker Carlson Tonight to denigrate “identity politics,” as if that term could not describe Trump’s support for White Supremacists. He spent millions of his own money to fund the Hulk Hogan lawsuit that drove Gawker out of business, killing what surely would have been a critical source of Trump corruption coverage.

To make matters worse, Thiel this year contributed nearly a million big ones to Senate hopeful Kris Kobach,  a prototype for Donald Trump before Trump ever ran for president. The Republican made his reputation as the Kansas Secretary of State by crusading against immigrants and (imaginary) voter fraud, but he also trafficked in virulent homophobia. At one point, he compared homosexuality to drug use and polygamy. A few weeks after the donation, Kobach, deemed too extreme even for the GOP, was trounced in the primary by a more moderate Republican.

Thiel managed quite the feat: bankrolling the four horsemen of the democracy apocalypse, Trump, Hawley, Cruz, and Kobach.

To his credit, Thiel did give up on Trump in the 2020 campaign cycle, not contributing to the re-election campaign. Apparently, the administration’s mishandling of the COVID-19 pandemic was too much for Thiel to swallow. reportedly calling the Trump reelection campaign, in a nice turn of phrase, the SS Minnow, a reference to the shipwrecked boat from Gilligan’s Island.

But even there, Thiel has a connection. Palantir, the data-mining firm that he founded, was awarded a contract by the Trump administration to track the virus. (That’s better than the awkward hand fondle Trump gave him for his support.)

Now, CDC officials are urging the Biden administration to dump the system Palantir created because they say it’s potentially inaccurate. Like the company founder’s political instincts, it appears to be deeply flawed.

Thiel is said to be focused on raising two kids with his husband; let’s hope that family leads to a “kinder, gentler” kind of political philanthropy in the post-Trump era. The world could use his help.