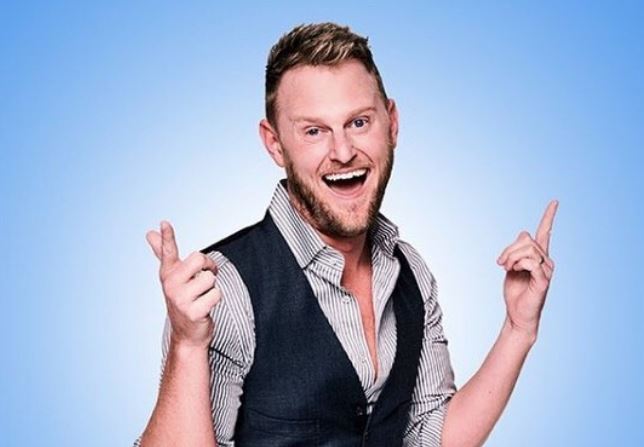 Queer Eye’s Karamo Brown stepped in it last week when he complimented his Dancing With The Stars co-star Sean Spicer by calling him “a really sweet guy.” But while the whole world seemed to be against Brown for the remarks, his Queer Eye co-star Bobby Berk had his back. At least, for a little while.

“I’m a big believer that if you can talk to someone and meet in the middle that you can learn about each other and help each other both grow,” Brown told Access Hollywood in an interview. “So we have been chatting all day today. Like, he’s a good guy, a really sweet guy. Yeah, yeah, exactly. Karamo from Queer Eye saying Sean Spicer is a nice guy. I know. I know.”

Brown’s praise of Spicer, who regularly lied to the American people on behalf of Donald Trump during his stint as White House Press Secretary, was met with widespread criticism on Twitter, prompting the reality TV personality to block many of his LGBTQ followers and eventually delete his account altogether.

“We fight harder than your ass ever has for people of color and members of the LGBTQIA community,” Brown quipped at one person before his account went dark.

And that’s when Bobby Berk got involved. And then un-involved himself less than 24 hours later.

In a since-deleted tweet thread, Berk accused DWTS producers of “planting political land mines” and said he was “saddened” by what Brown was going through.

Berk went on blame the whole thing on “media training,” explaining that Brown, like all DWTS contestants, had been instructed not to criticize other co-stars in interviews.

“We’ve been trained over and over to not talk smack about anyone in interviews and to try to be nice as possible,” Berk said. “When being backed into a corner about voicing his opinions about @seanspicer, Karamo’s media training kicked in as we are trained to do.” 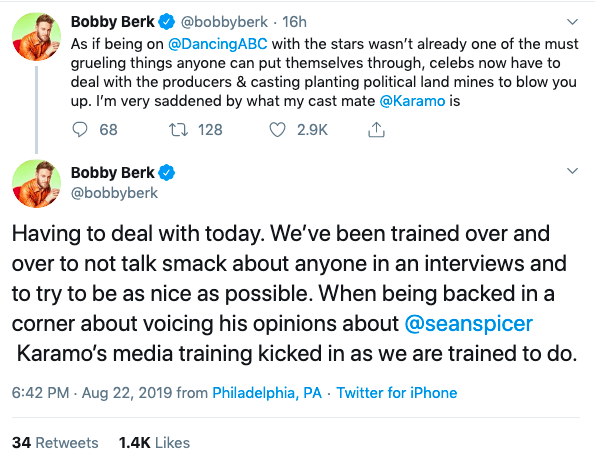 In another tweet, Berk continued: “Don’t talk negatively about people in interviews! Always be nice! It’s frankly a really sh*tty situation to be put in. @ABCNetwork should be ashamed of themselves for having put the cast in the position of having to take political sides on a f*cking dance competition.”

“Everything around us is constantly too political as it is. Shame on you ABC for now making this beloved show political by casting one of the biggest liars who has ever been,” he added. “It’s called ‘Dancing with the STARS’ and the fact that you’re calling him a star is disgusting.” 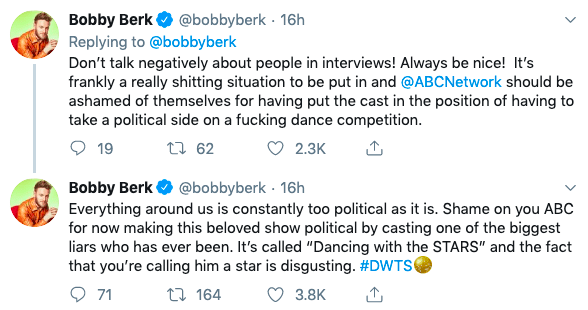 The tweets mysteriously vanished from Berk’s feed less than 24 hours later. It’s unclear why they were deleted (perhaps his agent told him it’s not a good career move for a reality TV personality to cry “shame” at one of TV’s most powerful networks?), and Berk hasn’t mentioned Brown or the DWTS scandal since, choosing instead to tweet about National Dog Day at to congratulate Taylor Swift on her VMA award.

“We’ve got a great and diverse cast,” the statement read. “We are excited about the season.”