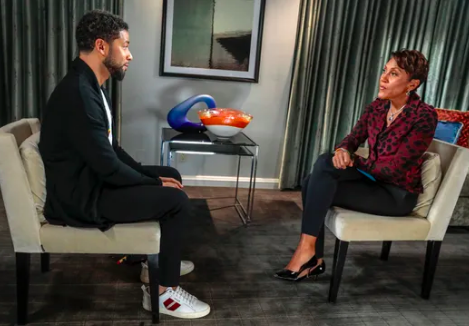 Robin Roberts is once again speaking out about her controversial interview with actor Jussie Smollett.

In case you forget, the GMA host interviewed Smollett on February 14, shortly after the Empire star reported being the victim of a homophobic, racist hate crime. It was also right around the time questions began to emerge regarding his account of the assault.

As the situation became clearer, Roberts came under fire for not grilling Smollett harder on his account of the assault. Now, she is reflecting on the interview with frustration.

“I’m a black gay woman, he’s a black gay man,” she told her GMA co-hosts this week. “He’s saying that there’s a hate crime, so if I’m too hard, then my LGBT community is going to say, ‘You don’t believe a brother.’ If I’m too light on him, it’s like, ‘Oh, because you are in the community, you’re giving him a pass.”

“It was a no-win situation for me,” Roberts said. “I pride myself in being fair. I know how much work went into being balanced about what had happened and to challenge him on certain things.”

Roberts went on to explain that she had hesitations over doing the interview, but she agreed to do it after Smollett claimed he would reveal thereto unspoken information regarding the attack.

She further complained that the actor arrived more than two hours late for their recording session.

Smollett is scheduled to appear in court March 14, and has been released from jail on bail. Prosecutors allege that he faked the attack, as well as several threatening letters mailed to the Empire offices as a way to boost his profile for a pay raise.

Though Smollett denies any involvement in the attack, producers have cut his role from the remaining episodes of Empire this season.