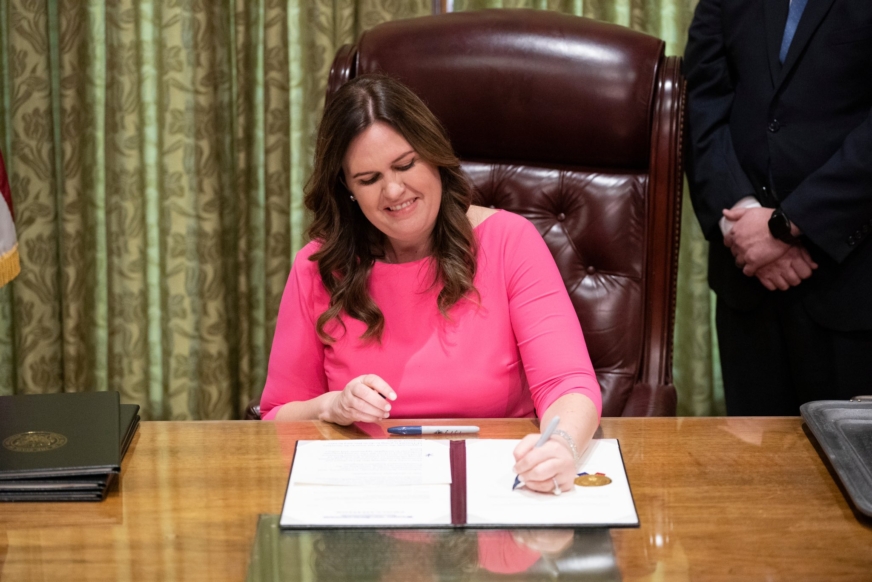 One of Sanders’ very first acts as the chief executive of the fourth poorest state in the nation was to ban state agencies from using the gender-neutral term “Latinx.”

Sanders called the word “culturally insensitive” in an order that’s prompted complaints from some critics who view it as yet another attack by Republicans on the LGBTQ community. Yet her move may have limited impact, given that the word does not appear to be widely used in Arkansas government.

It was among several orders the 40-year-old former White House press secretary signed within hours of taking office that were cheered by conservatives, including restrictions on teaching critical race theory in public schools and banning TikTok on state devices. The Latinx prohibition gives agencies 60 days to revise written materials to comply.

“One of the things as governor that I will not permit is the government using culturally insensitive words,” Sanders said after signing the order.

Related: Sarah Huckabee Sanders gets destroyed by Australian reporter who will not stand for any of her crap

All nouns in the Spanish language are gendered. In recent years, the term “Latinx” was introduced as a gender-neutral alternative to “Latino” and “Latina.” While many members of the LGBTQ+ community have welcomed the new term, others find unnecessary, and some have refused to embrace it.

Conservatives, especially those of the straight het cis white variety, have been especially triggered by the term. In response to Sanders’ order, the Log Cabin Republicans issued a statement praising her for it.

“The term Latinx is just another misguided product of the modern left’s relentless obsession with stripping gender from American life, an obsession that LGBT conservatives fight back against daily,” Charles Moran, the group’s president, said in a statement.

Regardless of how you feel about the word “Latinx”, the fact that Sanders made this one of her first acts as governor sends a clear message: She’s not above using the power of her office to push her “anti-woke” agenda and do harm to queer people.

In an op-ed published by CNN, Ed Morales writes:

With her executive order, Sanders is making sure the debate around “Latinx” drowns out more important issues in the community. Her anti-woke rhetoric will do nothing to address the economic issues that are front and center in the minds of Latino/as in the US, including in Arkansas, one of our nation’s poorest states.

The jury is still out on “Latinx,” and the new term, “Latine.” But as long-standing homophobic prejudices dissolve and as gender identities become more diverse, perhaps an increasing amount of Latinos will opt for some sort of alternative term. This latest Sanders misstep only shows that the needs of Latinos can never be reduced to a debate over a label, or a plank of a contrived anti-woke agenda.

After signing to order, Sanders too to Twitter to crow about it.

“I banned the use of ‘Latinx’ in government because I will not permit my administration to use culturally insensitive words that greatly offend the vast majority of Hispanics,” she wrote. “No matter what the liberal corporate media says we will keep the radical left’s agenda out of Arkansas.”

I banned the use of “Latinx” in government because I will not permit my administration to use culturally insensitive words that greatly offend the vast majority of Hispanics. No matter what the liberal corporate media says we will keep the radical left’s agenda out of Arkansas. https://t.co/zni0sBkvTN

Now, let’s check out some of the responses…

I know you’re new to Arkansas, so just a heads up, weed is not recreationally legal here. You need a prescription here before you get high and tweet.

Did you consult with members of that community before coming in as the white savior (in your mind) and banning the term?

Never said a cross word about her boss calling COVID the “China Virus” tho.

‘Latinos’ is more excepted than the term Hispanics. @SarahHuckabee should read the definitions before using that term too.

“Liberal corporate media” and “radical left agenda” in one tweet!

You banned the use of “Latinx” because you’re pandering to the racists who made you governor.

While I understand trying to maintain consistency of language, eliminating words is problematic for me.

For a state with the 4th highest poverty level in the country, this shows that your priorities are out of whack, and that you’re more concerned with politics than doing the hard work of solving the state’s many problems.

“I don’t always recognize the feelings of people of color, but when I do, it’s to excuse my transphobia.”

-The least interesting governor in the world

The use of the term Latinx was so important that it needed your attention and action? Now do homelessness, food insecurity and education.