From the look of it, the “Mercy” singer was coming out as gay — news that immediately spawned a #ShawnComingOut hashtag. 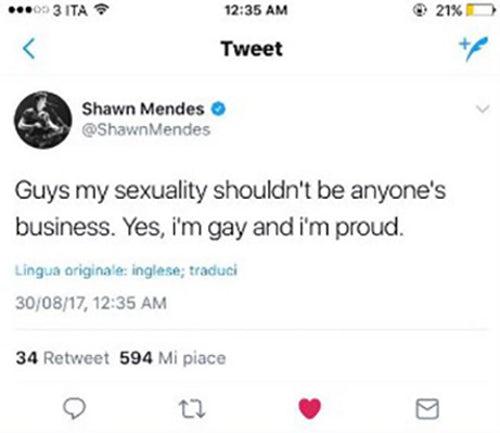 But as you can no doubt imagine, his account had been hacked and the message was written by an imposter; a swindler. And it looks as though sleuthing fans saw right through the ruse right away.

i have his notifications on if that was a real tweet i would've seen it. stop assuming his sexuality. just let him be shawn. #ShawnComingOut

“Just let him be Shawn” was, in fact, the overall consensus among his fanbase. Focus on the music, his fans clamor. Let it move your body. Let it go ahead and stir your soul, in fact.

Related: How Are We Feeling About Shawn Mendes’ Shirtless Photoshoot?

Why is Shawn's sexuality such a big topic in pop culture?? lmao he makes music and the focus should be on THAT #ShawnComingOut

Someone also called Mendes an “unproblematic angel,” so bear that in mind, too.

SHAWN IS AN UNPROBLEMATIC ANGEL AND MAKING FAKE HASHTAGS ABOUT HIS SEXUALITY IS EXACTLY WHAT WE AIN'T GONNA DO #ShawnComingOut pic.twitter.com/520XWTlv49

While Mendes has yet to react to the fake Tweet, he’s addressed rumors about his sexuality in the past. In June 2016, he took to Snapchat to voice his frustration: