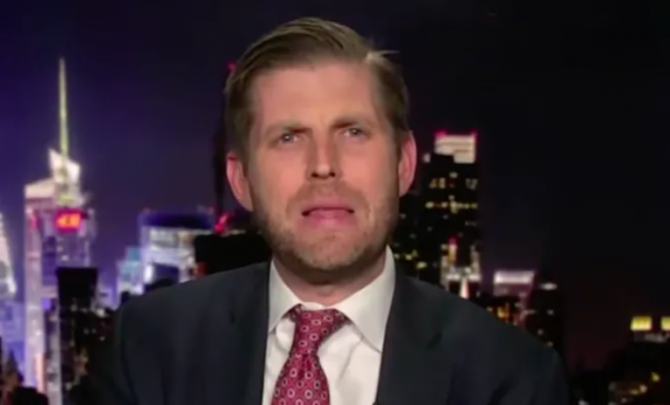 We think it’s safe to say Eric Trump and his wife Lara can both expect subpoenas from the January 6 committee after a bombshell new report claiming they communicated with insurrectionists on burner phones prior to the Capitol attack was just published by Rolling Stone.

According to the report, in the days leading up to the deady riot, Kylie Kremer, one of the top organizers for Donald Trump‘s “Save America” rally that preceded the violence, allegedly told people to use cash to buy burner phones so they could communicate directly with the Trump family and other White House officials.

The report claims the phones were used to have “high level” conversations with Eric and Lara, as well as former White House chief of staff Mark Meadows and Trump surrogate Katrina Pierson. An anonymous “March for Trump” team member tells the magazine, “[Kremer] needed burner phones in order to communicate with high level people is how she put it.”

“They were planning all kinds of stuff, marches and rallies. Any conversation she had with the White House or Trump family took place on those phones.”

Burner phones — cheap, prepaid cells designed for temporary usage — do not require users to have an account. This makes them hard to trace and ideal for those who are seeking anonymity — particularly if they are purchased with cash. The use of burner phones could make it more difficult for congressional investigators to find evidence of coordination between Trump’s team and rally planners.

Related: Eric Trump, who stole from kids with cancer, freaks out over Christmas toys stuck on container ships

Neither Kremer nor did any of Trump’s family members, Meadows, or Pierson have responded to the explosive report. But Twitter sure has a lot to say about it…

Good morning to everyone who didn't use a burner phone to communicate with Jan 6th terrorists. Yep, looking at you Eric Trump.

If you’re wondering where Donald Trump Jr was, he was looking for an extinguisher to put out his burner phone.

Remember *yesterday when Eric Trump randomly tweeted out about the Justice Department being corrupt and out of control and then today it comes out that he was using a burner phone to coordinate with Jan. 6th organizers.

BREAKING: Lara and Eric trump used burner phones to communicate with organizers of the 1/6 insurrection. The January 6th Committee became suspicious when they saw communications between Eric and event organizers that couldn’t be traced back to his personal phone: pic.twitter.com/aPz4eYmqEx

Get a search warrant for Eric Trump’s home. He’s just stupid enough to still have the burner phone.

Eric trump was always gonna be the one that blew it

He's the dumb one