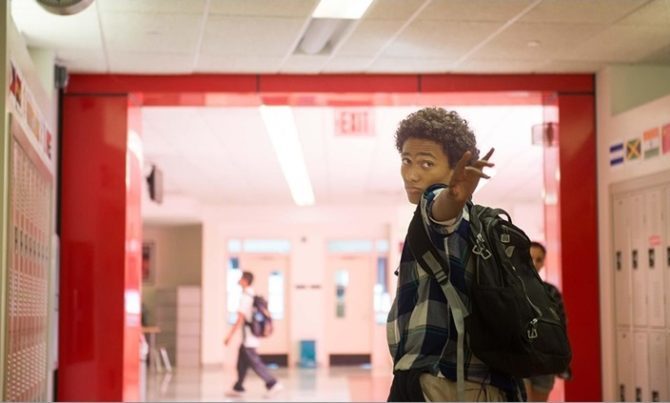 To celebrate the tenth Transgender Day of Visibility, we rounded up ten of our favorite trans-themed films, the visual medium where the T in LGBTQ representation has made significant strides even as it has a long ways to go.

This new series debuted at Sundance before landing on Revry. Director Andre Perez tackles the issues facing transgender people of color, from migrant detention to military service to living in conservative parts of the nation. In essence, the show confronts the issue of marginalized people within marginalized communities. It will appropriately premiere to coincide with this year’s Trans Day of Visibility on March 31.

Sebastian Lelio became the first Chilean Oscar winner with this film about a transgender woman seeking justice after the death of her longtime boyfriend. Lead actress Daniela Vega also became a bonafide star for her fearless and dynamic performance which required her to perform opera arias, stunt driving, and nude scenes. Both hilarious and genuinely moving, A Fantastic Woman ranks as one of the best films ever made with a transgender lead.

Revry strikes again, this time with a documentary series about adolescents and the challenges they face on a daily basis. That includes several young transgender subjects, all of whom open up about transitioning at a prepubescent age. The show also features extensive interviews with family, friends, and teachers, all of whom discuss coming to understand and trust when a child comes out as transgender.

The Most Dangerous Year

Speaking of coming out at a young age, The Most Dangerous Year chronicles the life of a 5-year-old transgender girl against the background of Washington state’s 2016 bathroom bill controversy. Though the film uncovers vital political material—including the stealth techniques anti-LGBTQ forces often employ to damage the community—the film belongs to young Annabelle Knowlton, who describes always understanding that she is transgender, and who’s plucky attitude will inspire activists of all kinds.

Related: Celebrate Trans Day of Remembrance With A History Of Transgender Visibility

How this musical continues to go overlooked, even after stars MJ Rodriguez and Indya Moore got the lead roles on Pose will forever perplex us. The plot concerns a young teen named Ulysses who discovers the underground world of the Drag Ball scene. Featuring some terrific songs and moving performances (in particular, by Rodriguez), Saturday Church plays like the coming out fantasy so many of us wish we’d lived.

This bodybuilding doc won the Documentary prize at Outfest last year. Transgender director T Cooper follows several transgender men at various stages of their transitioning as they enter into various bodybuilder contests. Other than the scantily-clad, super ripped bodies, Man Made offers a candid look into the tribulations of trans men and how the transitioning process affects relationships. By turns irreverent and moving, Man Made features a little-told story vital to the ongoing conversation about transgender rights.

In recent years, Boys Don’t Cry has gotten something of a raw deal from critics. That’s a shame; the movie remains one of the most empathetic and groundbreaking stories of a transgender character ever set to film. Much of the power of the movie comes from the lead performance by Hillary Swank as real-life transgender man Brandon Teena. Swank gives, quite simply, one of the best performances ever, so it should come as no surprise that she picked up an Oscar for her work. Shocking, infuriating and horrific to this day, Boys Don’t Cry has lost none of its potency in the 20 years since its release.

We’re still slightly obsessed with this very indie dramedy about a pair of transgender hookers working in Hollywood. Just as she gets out of prison, sex worker Sin-Dee (Kitana Kiki Rodriguez) finds out her pimp/boyfriend has started seeing cisgender woman. Sassiness ensues, as Sin-Dee partners with her friend Alexandria (Mya Taylor), an aspiring singer, to track down her boyfriend and his new flame. Just when it seems the movie couldn’t get any more ridiculous, it takes a dark and moving turn, plumbing the depths of the Alexandra/Sin-Dee friendship, and the cruel life sex workers often face. Made on a shoestring budget, and shot on three iPhones (!), Tangerine has a grittiness and a verisimilitude few movies can claim.

How could any screening list for the Transgender Day of Visibility not include Pose, the most groundbreaking show to ever feature transgender characters and creative minds? Centered on the New York Drag Ball scene in the 1980s, Pose recounts a crucial, if little-discussed, chapter in queer history, and how a family of outrageous transgender people fueled pop culture in the 80s and 90s. MJ Rodriguez, Indya Moore, and Billy Porter give star-making performances in a story of artistic drive, the AIDS crisis, chosen family and glamour.