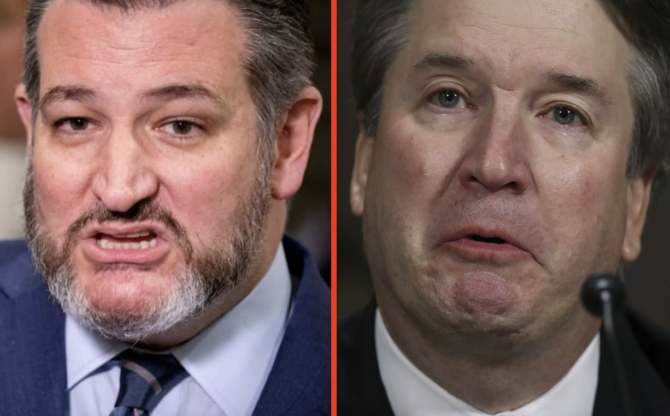 Ted Cruz is absolutely livid that Brett Kavanaugh didn’t get to enjoy a slice of Morton’s Legendary Hot Chocolate Cake® before he was driven out the back door of a Morton’s Steakhouse in Washington, D.C. by peaceful pro-choice protesters last week.

On Monday, Cruz sent a letter to Sen. Dick Durbin, Chairman of the Senate Judiciary Committee, demanding he call Attorney General Merrick Garland before the committee to talk about why he hasn’t done more to protect Supreme Court Justices from having their steak dinners ruined.

“I am requesting [Attorney General Garland’s] attendance so he may detail the steps the Department of Justice is taking to protect our Supreme Court Justices in the wake of an unprecedented harassment and intimidation campaign,” Cruz’s letter stated.

Related: Brett Kavanaugh forced to skip dessert, flee out the backdoor of steakhouse to avoid protesters

“Congress passed this law to allow judges at every level of the judiciary the freedom to exercise their judicial power free from outside influence or intimidation,” Cruz continued. “Article III of the Constitution guarantees judicial independence by granting judges life tenure and salary protection so they are not influenced by anything but the law and facts in the case before them.”

We would like to add that Amendment 1 to the Constitution guarantees that “Congress shall make no law respecting an establishment of religion, or prohibiting the free exercise thereof; or abridging the freedom of speech, or of the press; or the right of the people peaceably to assemble, and to petition the Government for a redress of grievances.”

In his letter, Cruz went on to say that “despite clear evidence that federal law was violated by mobs of protestors at the Justices’ homes, the head of the Department of Justice, and chief law enforcement officer of the United States, flatly refused to enforce federal law.”

The anti-LGBTQ senator followed that up with an angry tweet and an appearance on Fox News yesterday, during which he called on Garland to “follow the law!”

“Democrats have decided that mob violence furthers their political ends,” Cruz, who famously vowed to object to certification of Joe Biden‘s 2020 presidential election victory, tweeted. “It’s an absolute affront to rule of law, it’s dangerous, and it needs to stop.”

Democrats have decided that mob violence furthers their political ends.

It’s an absolute affront to rule of law, it's dangerous, and it needs to stop. pic.twitter.com/Xdcp29kn51

But an armed insurrection is just peaceful political discourse. Right…

There’s a right to eat steak at Morton’s enumerated in the constitution?

You’ll be watching the hearing, then…

I don’t see the problem. Kavanaugh can always travel to another state to eat dinner. Or visit a back-alley restaurant; the food might be unsafe but oh well. I don’t see what the big deal is.

Mob violence? Sounds like someone doesn’t approve of our constitutional right for peaceful assembly

I thought it was legitimate political discourse? 🤷‍♂️

People protesting someone from outside of a restaurant isn’t “mob violence,” Senator.

THIS is mob violence. pic.twitter.com/bETbd0KY6k