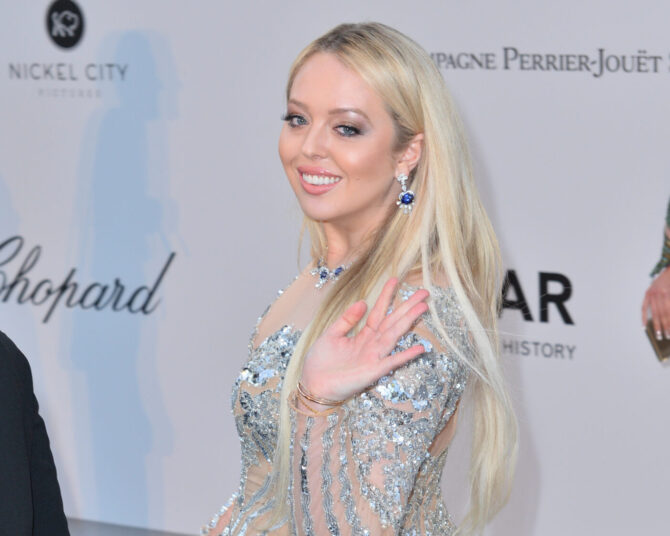 It’s been a truly terrible week for the Trumps.

Between the ongoing federal investigation into confidential documents seized from Mar-a-Lago by FBI agents and New York Attorney General Laticia James filing a $250 million civil lawsuit against the Trump Organization, everyone in the Trump klan is more than a little screwed.

Everyone except for Tiffany, that is.

While her father and older siblings likely spend every waking minute on the phone with lawyers, Donald Trump‘s least favorite daughter is reportedly drinking her water, going about her business, and blissfully planning her upcoming wedding.

With Donald Trump and his three eldest children being sued for $250 million by New State Attorney General Letitia James for business fraud, Tiffany’s focus is her wedding to Michael Boulos at Mar-a-Lago on November 12. Even though the couple got engaged at the White House on her father’s last day in office, Tiffany’s relationship with Donald Trump was often tense. “She went a very long time without seeing him,” a family friend told People in 2017. “The last time she was at a family function with him, it was awkward for her, and she didn’t feel totally welcome. They always had a strained relationship her whole life, and it got exacerbated by the presidency. It’s gotten much worse now.”

Tiffany and Michael met at Lindsey Lohan’s now-shuttered beach club in Mykonos in July 2018 and got engaged a year and a half later, in January 2021, just days after her father incited that deadly insurrection on the U.S. Capitol.

“It has been an honor to celebrate many milestones, historic occasions and create memories with my family here at the White House, none more special than my engagement to my amazing fiancé Michael!” Tiffany posted to Instagram on February 19, 2021. “Feeling blessed and excited for the next chapter!”

Michael was born and raised in Nigeria, where his family owns a large conglomerate. As you may recall, Donald Trump infamously referred to African nations and Haiti as “sh*hole countries” in 2018. But apparently Michael isn’t bothered by this. Or at least not enough to have his wedding somewhere other than Mar-a-Lago.

Judge Raymond Dearie, the court-appointed special master, said in a filing Thursday that Trump’s team needs to submit a sworn declaration saying if they believe the Justice Department included any items on their “inventory” of materials taken from Mar-a-Lago that were not actually seized during the search.

The declaration must include “a list of any specific items set forth in the Detailed Property Inventory that Plaintiff asserts were not seized from the Premises on August 8, 2022,” Dearie wrote in the order.

This has come up as an issue in the case because Trump himself, some of his attorneys, and several of his outside Republican allies have publicly claimed that the FBI planted evidence at Mar-a-Lago during the August 8 search.

However, they have offered no evidence to support these accusations.

This is probably going to be very, very difficult for Trump’s camp since, 1. The FBI didn’t plant any evidence, and 2. When asked by Sean Hannity on Fox News this week whether he had security footage that showed agents planting evidence, the ex-president said, “No, I don’t think so, they’re in a room.”

Dearie has given Trump’s camp until September 30 to submit a report detailing the “specific items” taken from Mar-A-Lago by the Justice Department but “that Plaintiff asserts were not seized from the Premises.”

Now, back to Tiffany. Here’s what people are saying about her on Twitter…

Tiffany Trump is the only adult child to not be charged with fraud.

Tiffany Trump enjoys a celebratory doobie as she confirms her name is not included on the NY Attorney General’s $250M lawsuit against the rest of the Trump Crime Family. pic.twitter.com/DuYkKme2cY

Tiffany Trump: the least favorite child and also the one with the least criminal exposure

Tiffany Trump just realized it pays to be the forgotten one. pic.twitter.com/P2pPYtg3RU

You really lucked out, @TiffanyATrump

It had to be hard for her while growing up, but being ignored by her father worked out pretty well for Tiffany Trump.

Tiffany Trump watching that Letitia James Press conference knowing all the years of her father ignoring her existence has just paid off. pic.twitter.com/FZ15Vwy9HR

Related: It sure seems like Tiffany Trump and her mom are trolling Ivanka right now