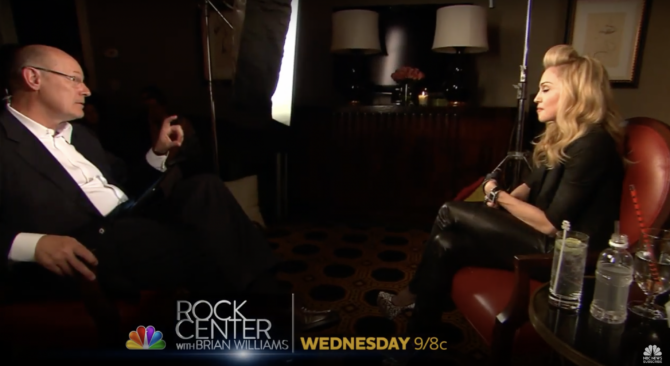 10 years ago this week, Madonna released her twelfth studio album MDNA, the hotly anticipated follow-up to 2008’s Hard Candy that is widely considered to be her “divorce album” since it was her first major release since splitting with filmmaker Guy Ritchie.

Related: This rare footage of Madonna rehearsing before Super Bowl XLVI will remind you why she’s the queen

The album debuted at #1, selling an impressive 359,000 copies. A week later, however, it broke records by dropping to #8 with sales of 48,000 copies, making it the then-largest second-week percentage sales drop for a #1 debuting album of the Nielsen SoundScan era. Not long after that, it fell off the charts altogether.

Most fans (though not all) would agree that MDNA is not Madonna’s finest work. It failed to produce any hit singles. The songs felt rushed and uninspired. And unlike some of her other albums (i.e. American Life and Erotica), it hasn’t gotten any better with age.

Perhaps the most memorable part of the whole MDNA era was actually the promotion behind it. Madonna, newly single and looking incredible, gave a ton of sassy interviews (including the one where she called Lady Gaga “reductive”), and she embarked on an 88 show world tour that earned over $305 million and rave reviews.

At one point during the promo campaign, she appeared on the show “Rock Center with Brian Williams” where she was questioned by a humorless Harry Smith in one of the most awkward interviews ever.

“The title of the album is MDNA,” Smith asked in an accusatory tone at one point during the sit-down. “M-D-M-A are the initials that go along with the chemical formula for ecstasy. Was there any coincidence there?”

“No, not at all,” Madonna replied, cooly. “I don’t know how that happened. So weird.”

Smith then proceeded to grill her on whether she was trying to appeal to a crowd that enjoys using recreational drugs. But Madonna didn’t take the bait.

“People that go to festivals all day long… enjoy themselves,” she said, adding that she takes heat for everything she does.