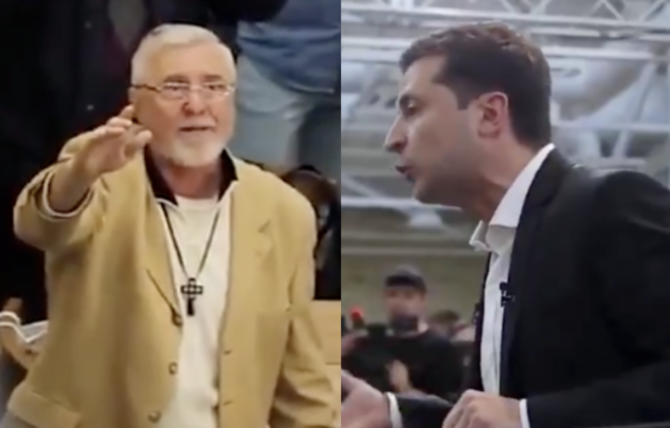 Volodymyr Zelensky made an impassioned plea at Sunday night’s Grammy Awards urging viewers to support Ukraine in any way possible as Russia continues to commit war crimes in the Eastern European nation.

“Fill the silence with your music! Fill it today. To tell our story. Tell the truth about the war on your social networks, on TV. Support us in any way you can. Any — but not silence,” he said in a pre-recorded video.

People around the world have been impressed by Zelensky’s fearless leadership over the past several weeks, but for anyone who paying attention to him prior to all this, his incredible strength, stamina, and resolve are nothing new.

In October 2019, he held a record-breaking 14-hour press conference, during which he spoke to 300 journalists about a wide range of topics, including that controversial call with Donald Trump that got the ex-president impeached (the first time).

At one point during the press conference, a homophobic heckler interrupted to scream: “Why haven’t you given answers to bishops and all of us that you’ll stop the [George] Soros program Committee of 300 spreading perversity of homosexuality?”

The man, wearing a crucifix around his neck, demanded to know, “Will you prevent the legalization of prostitution and abortions?”

For context: the Committee of 300 was a popular conspiracy theory at the time which claimed a clandestine group was controlling global commerce, banking, politics, and media, among other things.

Zelensky patiently waited for him to finish his psychotic rant before politely denying to have anything to with the Committee of 300 or advocating for or against the legalization of prostitution.

“I’m not engaged in the legalization of prostitution which doesn’t exist in the country,” he said. “Legalization of anything in the country can only be implemented through Ukrainian law if changes to the legislation are approved. This means by the hands of the Ukrainian parliament and by approval of laws.”

As for queer people, Zelensky did not mince words when he said, “Regarding LGBT: I don’t want to say anything negative because we all live in an open society where each one can choose the language they speak, their ethnicity and [sexual] orientation.”

“Leave those finally at peace, for God’s sake!”

That viral video of Ukraine’s President @ZelenskyyUa powerfully shutting down a homophobic heckler — now with more context by @Hromadske. A rare public exhibit of passion in defending progressive values by a European leader these days ????????pic.twitter.com/v2uiEq5Ae4

President Volodymyr Zelensky addressed the audience in a pre-recorded video, wherein he said:“We are fighting Russia, which brings horrible silence with its bombs. The dead silence. Fill the silence with your music.” pic.twitter.com/DrUzTNqsDO

what a joke
24 comments