Donald Trump and his klan flew to Pittsburgh yesterday to  mourn the 11 slain congregants from the Tree of Life synagogue who were massacred on Saturday.

This morning, Trump tweeted: “Melania and I were treated very nicely yesterday in Pittsburgh. The Office of the President was shown great respect on a very sad and solemn day. We were treaty so warmly. Small protest was not seen by us, staged far away.The Fake News stories were just the opposite–Disgraceful!”

The tweet also included a 55-second video, set to music, showing the Trumps looking somber as they view the memorials outside the synagogue and shake hands with wounded law enforcement officers.

Melania and I were treated very nicely yesterday in Pittsburgh. The Office of the President was shown great respect on a very sad & solemn day. We were treated so warmly. Small protest was not seen by us, staged far away. The Fake News stories were just the opposite-Disgraceful! pic.twitter.com/9B9HgCF1G9

Now, here’s a picture of that “small protest… staged far away” Trump mentioned: 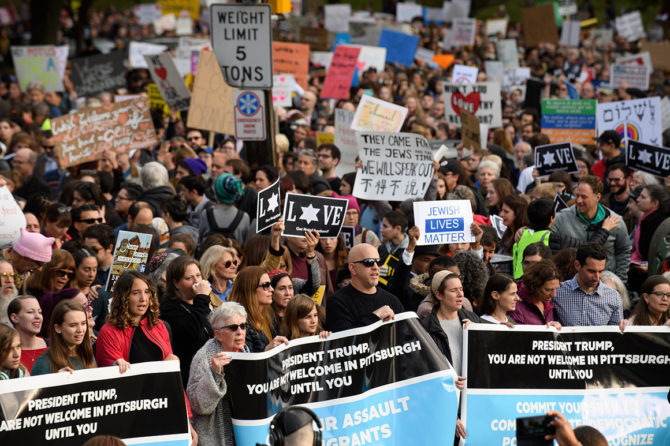 An estimated 4,000 people turned out in the Squirrel Hill neighborhood to march for solidarity while Donald Trump went around posing for photos.

Majority Leader Mitch McConnell, House Speaker Paul Ryan, Senate Minority Leader Chuck Schumer, and House Minority Leader Nancy Pelosi were all invited to tag along for Trump’s visit, but every single one of them declined the invite.

Prior to Trump’s visit, Mayor Peduto urged him not to come until after the dead had been laid to rest, saying the city lacked the public safety personnel to handle 11 funerals and a presidential visit simultaneously, and recommending the White House talk to the families of the victims before showing up at their loved ones’ hospital beds and funerals.

Meanwhile, several prominent Jewish leaders in the city published an open letter on Sunday saying Trump was not welcome in Pittsburgh until he denounced white nationalism and stops “targeting” minorities. By Wednesday, over 82,000 more people signed the letter.

Evidently, all this is Donald Trump’s idea of a “warm” welcome.