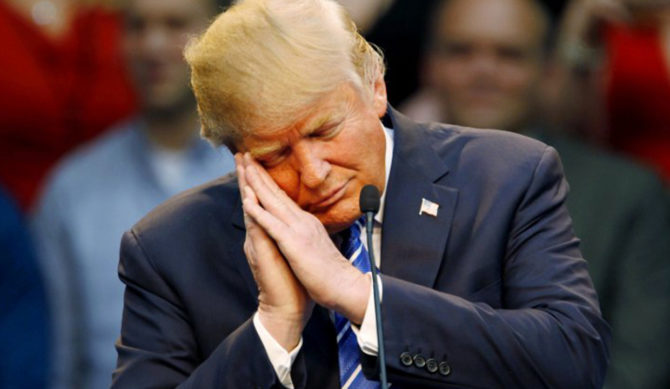 Are you tired of hearing about Donald Trump? Do the words “Melania,” “Ivanka,” “fake news,” and “Russia” no longer make you want to cringe, tremble convulsively, or cry yourself to sleep? Do you find yourself no longer phased by that daily barrage of doomful news?

If so, you might be suffering from Politics Fatigue Syndrome, a comically unofficial disorder coined by NPR that is plaguing millions in the United States. Major symptoms include feelings of sheer exhaustion, disdain, and utter hopelessness for anything political-related. In other words, it’s that feeling of being so f-ing over it (“it” being Trump).

And the masses are starting to feel it. Whether plastered on social media, or magnified in comment sections online, there is no denying that people are growing weary of Trump’s constant orange presence on every screen imaginable.

Not that reporter Mark Joseph Stern, who write about LGBTQ issues for Slate, necessarily blames those complaining. After all, it seems one cannot go a single minute without news breaking about the president or his cabinet, he says.

“It feels as though, if you step away from Twitter for even a few minutes, you will have lost an entire news cycle, or missed some huge development,” Stern tells Queerty. “There is just a constant flow of leaks, drama and bombshells from the [Trump] administration, and it certainly feels exhausting, not just as a reporter, but as a private citizen. Keeping up with everything is really tiring.”

Related: Donald Trump claims to have the will of the people, but Facebook video tells a different story

At the same time, Stern realizes there is a certain luxury in being able to say something like that.

“I think it is a sign of privilege to be able to say, ‘I am tired of hearing about Trump and the government,’” he says. “Because if, for instance, you are an undocumented immigrant, or a person that relies on the Affordable Care Act to receive health insurance, you don’t have the luxury of not thinking about [Trump and his administration], since [they] have an incredible amount of power over you and your life.”

It is Trump’s potentially dangerous power that ultimately inspired GLAAD, the famed LGBTQ advocacy organization, to start the Trump Accountability Project (TAP), a resource for journalists and others to “go find the facts about the people Trump is surrounding himself with,“ according to Drew Anderson, GLAAD’S Director of News & Rapid Response.

“We want to send a message to the President that we are unified as one and will hold him accountable every step of the way,” says Anderson of the project.

This includes not giving into Trump’s distraction tactics.

“The President hopes that all the distractions he creates will cause Americans – and the media – to become confused and disengaged from what’s really happening in Washington, because that’s when Trump and the U.S. Congress will pass measures that harm the most vulnerable, including the LGBTQ community,” Anderson says.

So, as a reporter, how does Stern avoid giving into these distractions, or becoming burnt out himself? He has established a few rules, he says: Once finished with work for the day, Stern will try to shut down his computer for the night; he’ll take his dog on multiple walks throughout the day; he also makes a point to power off his cell phone one hour before bed. There is even a rule for his partner.

“My partner is forbidden from telling me any political news the hour before bed as well,” Stern notes, a clear smile in his voice. “He is barred from doing so, he is not happy about it, but that is the way it is.”

Both Stern and Anderson agree that it is important to keep fighting, even in the face of ‘Trump fatigue.’

Related: Trump wonders where leaks are coming from as he conducts official state business in full public view

As a member of it himself, Stern feels it is the media’s obligation to continue calling out Trump’s wrongdoings.

“I think the press does have a real duty to keep covering this administration very vigorously, and I would be gravely disappointed if the press fell down on that duty.” Stern says, before adding, “The kind of misconduct that Trump routinely engages in thrives in secrecy, but cannot thrive when exposed to sunlight.”

For GLAAD, it all comes down to maintaining the progress that has been made, not just for the LGBTQ community, but other marginalized groups as well.

“With all the progress we’ve made as a community, we have to fight any sort of political fatigue that may exist in order to keep our progress moving forward and [not] backward,” says Anderson. “It’s especially important that we lock arms with the most vulnerable and marginalized among us – particularly transgender people, people of color, Muslims, and immigrants. Our message at GLAAD is that if you attack one of us, you’re attacking all of us. And we will fight back.”