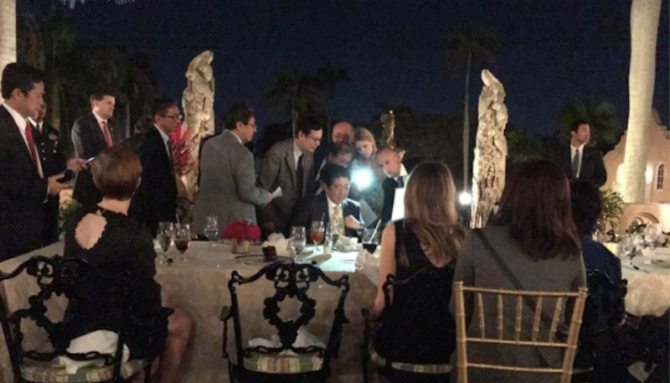 Forget what you’ve been reading about the utter chaos happening inside the White House and/or the “Winter White House” (a.k.a. Mar-a-Lago). According to Donald Trump, there’s nothing to see there. The “real story” are all the “illegal leaks” that seem to be happening under his watch, resulting in unfair gossip and rumors about him and his family.

Related: Melania Trump publicly thanks D-list actress on Twitter for coming to her defense

On Tuesday morning, the president tweeted:

The real story here is why are there so many illegal leaks coming out of Washington? Will these leaks be happening as I deal on N.Korea etc?

We beg to differ, actually.

The “real story” is exactly what’s being reported: That (former) National Security Adviser, Michael Flynn, lied about potentially compromising discussions he had with a Russian ambassador back in December, that the White House may have known he lied and did nothing until the press got wind of the story over a month later, resulting in Flynn abruptly resigning from his job late last night, less than one month into the new administration.

Yet Trump would like us to believe the “real stories” are “fake news” and “illegal leaks” that he spends about as much time watching TV as he does doing his job, that his wife has zero interest in being First Lady or living in the White House, and that he frequently takes breaks throughout his workday to call up his old golfing buddies to shoot the sh*t.

As for his “N.Korea etc?” reference in the tweet, those “illegal leaks” can be directly linked back to Donald’s meeting with Japanese Prime Minister Shinzo Abe at Mar-a-Lago last Saturday, when the guys chose to conduct highly sensitive official state business at a dinner table in full view of everyone else on the patio.

The Slot reports that Mar-a-Lago members got a front row seat to the guys learning that North Korea had launched a nuclear missile. Rather than, say, going inside to a more secure location, Donald chose to deal with the situation right there in front of everyone under the light of a cellphone whilst onlookers-turned-citjos snapped photos and posted them to social media: 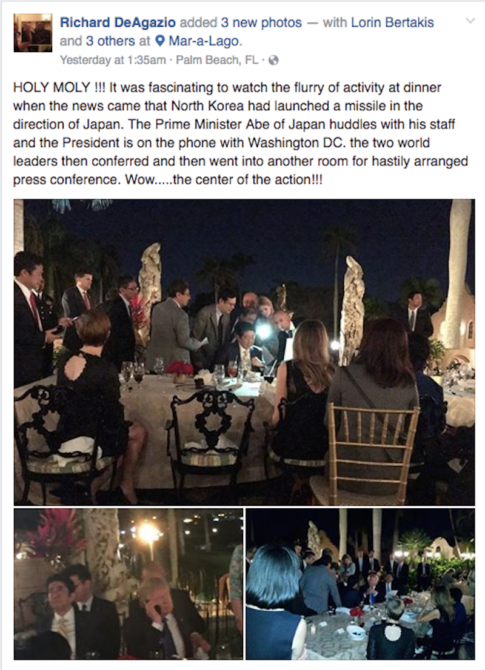 Earlier in the evening, the onlooker also posted a picture and description of Rick the “football” guy. Rick carries around the nuclear codes everywhere the president goes: 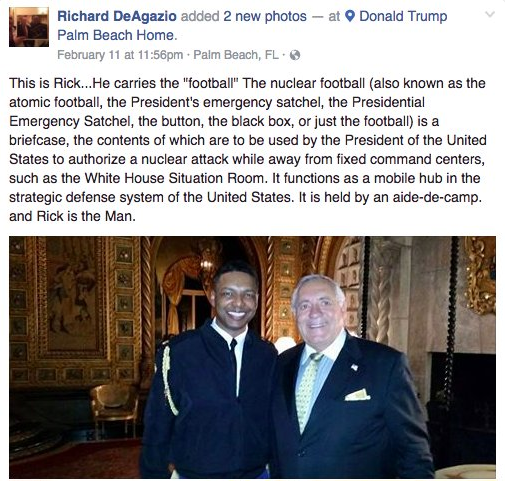 Oh, and then there was this picture that began circulating on social media showing Donald carrying his prepared remarks about the first emergency foreign policy statement of his presidency, giving the entire world a sneak peek of what he was supposed to say but didn’t because, apparently, he’s incapable of reading even a single page statement without going completely off-script:

A news photog captured this shot of Trump's prepared remarks. Sure looks like they sent him out with something different than he delivered. pic.twitter.com/DHLhRlhp8M

CNN reports that after delivering his statement to the press, Trump abruptly left the podium… to drop by a wedding happening at Mar-a-Lago’s Grand Ballroom where he snapped photos with the bride and her bridesmaids then grabbed the microphone and said:

“I saw them out on the lawn today. I said to the Prime Minister of Japan, I said, ‘C’mon Shinzo, let’s go over and say hello.’ … They’ve been members of this club for a long time. They’ve paid me a fortune.”

Donald’s right about one thing. The “illegal leaks” coming out of Washington are definitely a “real story.” But perhaps the reason nobody else is telling it is because he seems to be doing a fine enough job himself.

past is present
24 comments