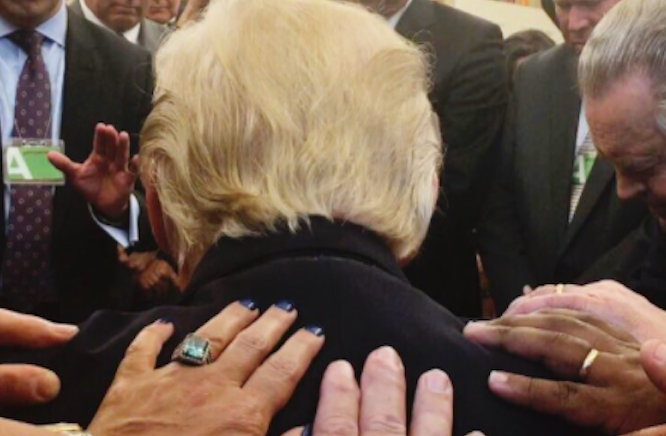 Nevertheless, this doesn’t look good for so many reasons.

The President sat down for an interview with antigay televangelist and 700 Club host Pat Robertson at the White House, heaping praise upon another anti-LGBTQ pastor — Robert Jeffress. He’s a “great guy,” the president told Robertson.

Related: Trump’s blood obsession is nothing new to people with HIV

Let’s just take a brief moment to break this down.

First, Trump’s invited interviewer, Pat Robertson, has a long history of spewing hate antigay speech disguised as religious insight. He’s the guy who once said that he “totally concur[red]” with Rev. Jerry Falwell when he said that “the abortionists, and the feminists, and the gays, and the lesbians” must “bear some burden” for the 9/11 terror attacks.”

And here are just a select few things he’s said over the years, chosen from a virtually unlimited well of bullsh*t: Gays are taking away everyone else’s freedom, gay-accepting Christians are going straight to hell, gay atheists should be treated like drug addicts. Oh, and you can get AIDS from towels.

Pastor Jeffress, whom Trump called a “great guy” in his interview with Robertson, is also a real piece of work. He has previously explained that LGBTQ people lead “miserable” and “filthy” lives and that “homosexuality is perverse — it represents a degradation of a person’s mind.”

With everything going on in and around Trump’s three-ring circus of an administration, it’s easy to overlook this interview as insignificant. But Trump yet again aligning himself with the antigay right is a huge cause for concern.

Keeping these people happy means opposing equality for LGBTQ people, and Trump has given every indication that he intends to keep them pleased as punch throughout his presidency. 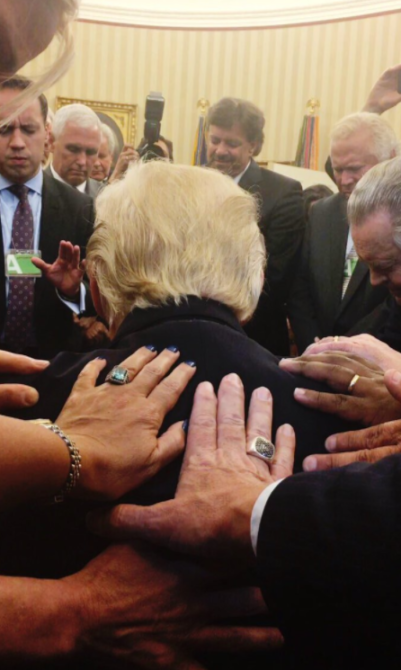 Take this photo from a few days ago, when Trump hosted around 25 leaders of the religious right, among which were antigay extremists and members of hate groups. They all prayed in the Oval Office, placing their hands on the president like he was some sort of holy artifact. And we’ll bet they weren’t praying for workplace protections for LGBTQ people to pass through the federal legislature.