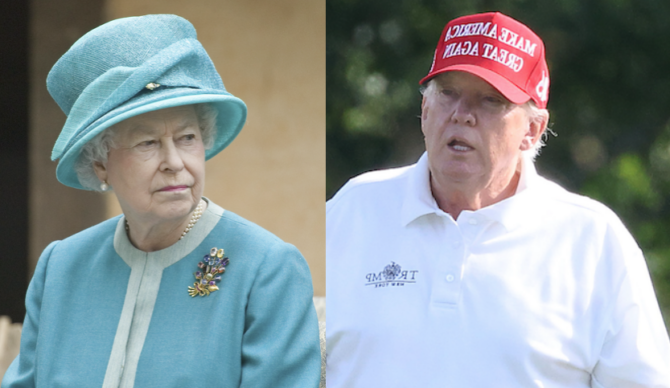 In news that should surprise no one, Donald Trump‘s relationship with Queen Elizabeth II wasn’t as rosy as he always imagined it to be.

The former president’s warped ego was dealt another blow when he did not receive an invitation to the late queen’s funeral, according to New York Times reporter Maggie Haberman.

Related: Will Harry and Meghan’s kids get prince and princess titles following the Queen’s death?

RawStory points to an intervew Haberman gave on CNN earlier this week, in which she told host John Berman:

“Trump and people around Trump believe he had some sort of special connection to the queen. There’s, for some reason, some expectation around people close to Trump that he should be getting an invitation. He fancied himself as having some kind of close relationship with her. A former aide to Trump told me, ‘No, the queen really liked him.'”

Haberman has heard nothing to support the idea that Elizabeth II, who met with Trump during his trip to the United Kingdom in 2019, held him in any kind of special regard.

“I have no reason to believe, from anything I have ever heard or read, that the queen felt as if she had some special connection to Donald Trump,” she said.

Queen Elizabeth II reigned over the United Kingdom from 1952 until her death on Thursday at the age of 96. The longest-reigning British monarch, her royal majesty worked with fourteen British prime ministers throughout her time as queen.

Thrust into the role at age 25 after the death of her father, she reigned through the Suez Canal Crisis, the decolonization of Africa, the formation of the European Union, the decriminalization of homosexuality, and most recently, the COVID-19 pandemic.

While generally seen as being pro-LGBTQ towards the end of her reign, she stayed largely silent on queer rights, only expressing moderate support that reflected the evolving social and political landscape.