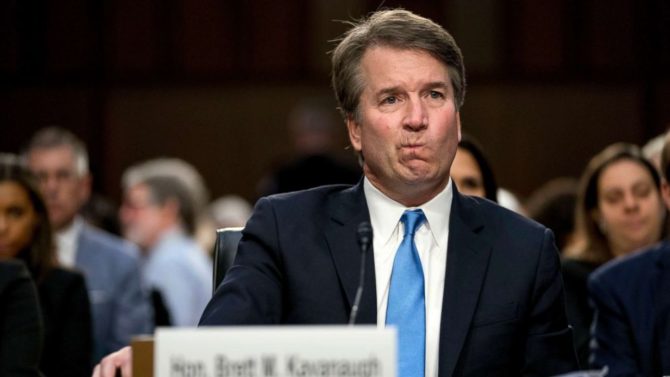 As Brett Kavanaugh prepares to testify before the Senate Judiciary Committee about the string of sexual assault allegations made against him, his college roommate has come forward to talk about the “grim” experience with Donald Trump‘s contentious Supreme Court nominee.

Kit Winter lived with Kavanaugh and a third roommate in a three-man suite at Yale in the fall of 1983. In an interview The Cut, Winter, who is gay, describes him as a “loud, obnoxious frat boy-like drunk” who left puke in the bathroom and hardly said a word to him during the entire year they lived together.

“It’s weird never saying hello to one of your two roommates,” he recalls.

Then there was the time someone (Maybe Kavanaugh? Maybe not?) snuck into his room and nailed a dead pigeon to his private bedroom door.

“I interpreted it as an act of social hostility slash terrorism,” Winter says. “I thought it was a very clear message. ‘We don’t like you, and we don’t want you here.’ I didn’t know who it was who didn’t want me here. I didn’t know who had done it.”

Honestly, is anyone surprised by the fact that an accused rapist and friend of Donald Trump is also a homophobic piece of sh*t?

One of Brett Kavanaugh’s freshman roommates was gay. It went about as well as could be expected. https://t.co/QjpDlEKnps pic.twitter.com/UGiPfTQqMS

Does it surprise anyone that Kavanaugh also bullied his gay roommate? https://t.co/COYW9r1dAj

Of course Brett Kavanaugh was also a bully to his gay roommate in college too.

Literally no one is surprised Kavanaugh treated his gay roommate like shit https://t.co/4PY4JEMckp

Kavanaugh does not seem to be the person he is creating, at all, for the public in the past few weeks. https://t.co/DFjSqsdYj4

What it was like to be Kavanaugh’s gay college roommate: “I thought it was a very clear message. ‘We don’t like you, and we don’t want you here.’” https://t.co/SDvdqrRssB

Kavanaugh hates the gays too ::pretends to be shocked:: https://t.co/Db4aRCrnT4

#BrettKavanaugh had two freshman roommates at Yale. One was Jamie Roche, who says he believes Deborah Ramirez’s allegation. The other roommate – Kit Winter – is gay & one day found a dead pigeon nailed to his bedroom door. Sounds like a hate crime to me. https://t.co/BaQItiNSl9

KAVANAUGH: “The men I knew in college say it is inconceivable that I could have done such a thing.”

KAVANAUGH’S FRESHMAN ROOMATE: I believe he did it because he was “frequently drinking excessively and becoming incoherently drunk” https://t.co/HJx17UcxY6

The more I read, the more I wonder if Brett Kavanaugh is a repressed closeted homosexual.

I’ve been waiting for #Kavanaugh‘s homophobic shoe to drop. You don’t treat women the way he did without also being a homophobe. https://t.co/IehejUD28a