Whatever your entertainment needs, we got your back (and hopefully your mind) with Queerty’s weekly “Culture Club” column with some of the highlights of new releases, streaming shows, classics worth revisiting, and what to drink while you watch

The Catch: The Matrix Resurrections

Visionary director Lana Wachowski returns to the franchise that changed the world with this fourth entry in the cyberpunk franchise. 20 years after the events of The Matrix Revolutions, Thomas Anderson/Neo (Keanu Reeves) now works as a successful game developer…a major feat, since when last we saw him he was dead. His most famous success: a trilogy of video games called The Matrix, which bares an uncanny resemblance to the story of the original movies. When a hacker named Bugs (Jessica Henwick) and Neo’s former mentor Morpheus (Yahya Abdul-Mateen II) discover Neo is still alive, they plot to rescue him once again from machine control. But in this new Matrix, things are very different…

We happily report that this new, different Matrix lives up to the legacy of the original trilogy in terms of character, action, and the philosophical arguments it addresses. Throughout, Wachowski makes statements both bold and sly about Twitter mobs, gaslighting authority figures, shifting alliances, and the ongoing struggle to understand an ever-changing world. She also has a lot of fun at her own expense, making fun of Hollywood reboot culture (including a hilarious scene with original trilogy fav The Merovingian, once again played by Lambert Wilson) and her own vow not to revisit the world of The Matrix.

We’re even happier to report this may well be the Queerest Blockbuster of All Time, courtesy of Wachowski’s trans lens. Queer cast members, characters, and themes abound, as does a deep abiding love of San Francisco. At their core, for all their high-level philosophizing, the Matrix movies have always been a meditation on how love empowers and unites humanity (and possibly machines) across time and space. Resurrections reinforces that theme with its statements on enduring friendship and, in particular, romance. The love affair between Neo and Trinity (a still formidable Carrie-Ann Moss) burns hot as ever here, as Wachowski uses it to comment on power and control. Featuring standout performances by Neil Patrick Harris and Jonathan Groff (the latter of which, we’re convinced could play James Bond after seeing him do kung fu here), we recommend The Matrix Resurrections as a rollicking, thoughtful, oh so queer time at the movies. Given ongoing rumors of more movies or an HBO series in the pipeline, we suggest jacking back in now.

In cinemas and on HBO Max.

The Step Out: Parallel Mothers

The great Pedro Almodóvar returns for this latest outing, a tale of women, sexual fluidity and national guilt. Parallel Mothers casts Penélope Cruz as Janice, a high-fashion photographer pregnant as the result of an affair with a married man (Israel Elejalde). Janice decides to keep the baby, and befriends Ana (Milena Smit), an also-pregnant younger woman. When Ana and Jancie give birth on the same day, they form an unexpected bond that will haunt them for years to come.

We don’t want to say much more than that, as Parallel Mothers features some wild plot twists best enjoyed without foreknowledge. We can add, however, that Cruz gives one of her absolute best performances here, while Smit matches her every step of the way. As with all Almodovar’s work, this movie has a fascination with feminity and motherhood, as well as the amorphous nature of sexuality and gender. It also might be Almodovar’s most patriotic film; the after-effects of the Spanish Civil War provide a backdrop and a context to the ongoing saga of Jancie and Ana. Watching, we wished we were slightly better versed in the history of the war, as we suspect the Janice-Ana relationship also makes metaphorical comments on the history of Spain, and the shared national trauma of the atrocities of Franco. Mysterious, captivating and evasive, Parallel Mothers reconfirms Almodóvar as one of the great directors working today with a story that defies easy meaning.

This hilarious web series returns for a final season landed on YouTube this week, wrapping up its ongoing story of a group of LGBTQ friends trying to survive life in New York City. This new season touches on the woes of dating, break-ups, conversion therapy and HIV with good humor and tenderness. Cody (Collin Kessler) deals with a recent diagnosis. Gabe (David Merten) and Adam (Kurt Hellerich) debate getting back together after the latter’s experiment with conversion therapy. Jo (Cristina Ramos) and Olivia (Amelia Windom) decide what constitutes a date. Meanwhile, Gabe struggles hard with aging, and how growing up (not to mention a changing body) changes his identity.

Call it a Friends for the queer digital age. Sharp writing by series creator Tyler Dwiggins brings the characters to life, as do the naturalistic performances by the cast. For anyone needing a momentary reprieve from uber-straight family holiday bashes, we suggest looking no further.

A Very Girl Night Stand Christmas marks Laurenzo’s third outing with these characters, and features several hallmarks (lesbian neurosis, familial holiday crazy) of her work. At this point, we’re wondering why Hollywood hasn’t taken more notice of her talent. Not only is Laurenzo an appealing actress with comedic gifts, she has a sharp wit and technical polish to her directorial style. The entirety of A Very Girl Night Stand plays without a cut, which speaks to her skill with actors and knack for snappy dialogue. Laurenzo apparently wants to pitch Girl Night Stand as a series, and having seen this short, we feel she’s already made a strong argument in favor. Somebody hire this woman!

The Stream: Hedwig and the Angry Inch on Revry

Can anyone ever have too much Hedwig? The beloved musical classic comes to streaming service Revry this month. To recap the plot for anyone living under a rock: the film tells the story of an accidental transsexual rock star named Hedwig (John Cameron Mitchell, who also directed) recounting her life after getting abandoned by her sometime boyfriend, Tommy Gnosis (Michael Pitt). Worse, Tommy has stolen all of Hedwig’s music, leaving Hedwig to question her life choices.

Few movies consider questions of age, sexuality, gender and love with the care or insight of Hedwig and the Angry Inch. For that matter, few musicals feature songs so memorable, either. The glam-rock soundtrack from Stephen Trask (who also has a role in the movie as one of Hedwig’s bandmates) doesn’t so much emulate the sound of David Bowie, Lou Reed, Iggy Pop, etc. as stand up along side it. At the center of it all is a transcendent performance by Mitchell, equal parts snarky humor and self-loathing. For anyone unfortunate enough to have missed Hedwig up until now—or for anyone that knows the beauty and power of this story—time to put on some makeup and put the wig upon your head once again.

Streams on Revry through January 31. 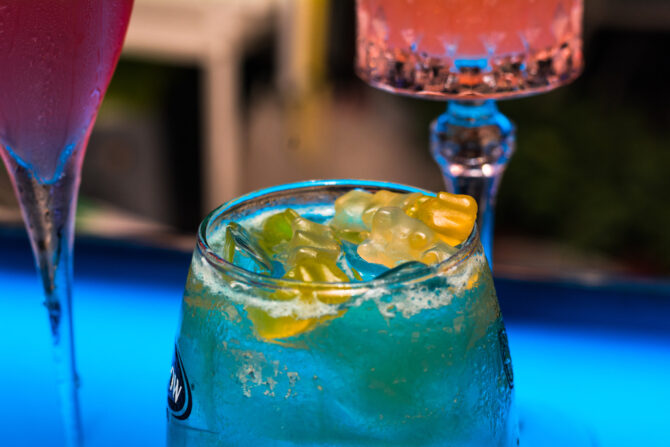 In honor of Hedwig‘s tenure on Revry, we suggest sipping on this sweet martini, so named for Hedwig’s favorite candy. Garnishing said drink with an actually gummy remains strictly optional.

Mix vodka, schnapps, lime juice, simple syrup, and cranberry juice in a shaker with ice. Strain into a martini glass. Top with soda.