On Monday, we pay homage to the great MLK whose sacrifice helped make our freedom possible. On Tuesday, the Oscar nominations are released. It’s a lot to take in, so we are here to help.

Have a look at our entertainment suggestions for this long weekend…

Director Ava DuVernay shot to the top of the Hollywood heap with this 2014 biopic about Martin Luther King and the fabled march on Selma, Alabama. The moment, to this day, still ranks as possibly the most important civil rights demonstration in American history–one which would inspire the gay rights movement in the decades that followed. David Oyelowo plays King as brilliant and flawed, which gives his performance all the more power though Carmen Ejogo, as Coretta Scott King, almost steals the show.

The Step Out: The Wife

Glenn Close teeters on the brink of gay icon-hood, having appeared as a number of gay characters in TV and film throughout her 45-year career. That she also played Norma Desmond on stage in Sunset Blvd. Also pushes her into the realm. This week, catch her in cinemas in The Wife, the indie drama in which she plays the wife—and the ghostwriter—of a literary giant. There’s a big reason she won the Golden Globe over Lady Gaga, and that she’s now tipped as an Oscar front runner.

The newest iteration of the sci-fi staple—the first to include an out-gay major character—returns Thursday, January 17 to CBS All Access. This season finds the crew of the Discovery, still recovering from their battle in the Mirror Universe, encountering a pre-Kirk U.S.S. Enterprise. Out-gay comic Tig Notaro will play a recurring role, as will the ever-fabulous Rebecca Romijn as the Enterprise’s first officer.

The Stream: The Hate U Give

Out-queer actress Amandla Stenberg stars in this drama about a young woman who sees her best friend shot to death by a police officer. Based on the novel of the same name, The Hate U Give examines the current racial tensions that helped spawn movements like #BlackLivesMatter with surprising even-handedness. We’re ashamed to say we didn’t catch this movie last year on its initial release. If we had, it would have made our best of the year list. Stenberg gives a spectacular, mature performance that should have her vying for an Oscar nomination. Given that film comes to Blu-Ray Tuesday, what better way to get caught up.

What gay man hasn’t danced to an R. Kelly tune in the club? For that matter, what American hasn’t danced to his song, “I Believe I Can Fly” in the car…or at the school dance…or in church…or just about anywhere else? Get ready for your blood to run cold: this docuseries on Lifetime uncovers more than two decades of child rape and abuse by the Grammy winner. With jaw-dropping survivor accounts, Surviving R. Kelly reveals the truth behind Kelly’s relationship with Aaliyah, his notorious sex tape, and how he kept it all a secret for so long.

The Steamy: The Pass

This queer drama didn’t get much stateside attention on its 2016 release. Thank goodness for Netflix, which brings the story of two longtime best friends & soccer teammates to a new audience. Do the pair just love each other as friends? Or do they want more? The premise makes for a tale rife with sexual tensions–as does the sight of star Russell Tovey wearing very little.

With the Oscar nominations coming out Tuesday, why not check out this Oscar-nabbing classic? Liza Minnelli and Joel Grey both took home statues for their work in the film, a story of a bisexual English writer and a cabaret singer living in Berlin just before World War II. Harrowing and funny, with unforgettable musical sequences (courtesy of Bob Fosse), it still manages to rank as one of the most underrated movies ever.

And speaking of Cabaret, we have to recommend the original novellas that inspired it. Written by openly gay author Christopher Isherwood, Berlin Stories chronicles the decay of German society amid the rise of Nazism. Even better: it features a number of characters struggling with the rising darkness and trying to drown their fears at sexually adventurous nightclubs. If that sounds at all familiar, just read it.

The Sip: The Bullshot 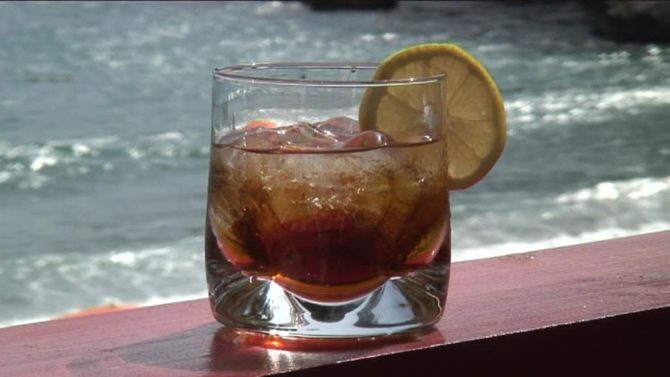 For anyone feeling truly brave, have a sip of this eclectic cocktail once favored by British writers like Noel Coward. The Bullshot combines vodka, Worcestershire sauce, and beef bullion into a flavorful drink—a sort of cousin to the Bloody Mary. Like a Bloody Mary, a Bullshot also makes use of lemon and Tabasco sauce for extra zest. The drink is perfect for the winter…and happens to go well with a movie and some pigs in a blanket.

The Snackage: Pigs in a Blanket

Finally, speaking of Oscars, what is it about the winter that makes us crave pigs in a blanket? We’re not sure, but we suggest whipping up a batch and pouring the cocktail sauce for some snackage during your screenings. Easy to make they also reheat well later in the week, should the craving continue.

Requires 1 14oz. package of cocktail wieners and 1 tube of prepared crescent roll dough. Unroll the dough and cut into tiny triangles. Wrap each wiener with one and place on an ungreased baking sheet. Bake at 350 degrees for 15-20 minutes and serve warm. Cocktail sauce served on the side.