Fairfax spoofs contemporary social media culture as well as style obsessions, often with biting humor and surrealist visuals. Jokes about race, gender identity, sexual fluidity, PDA with parents and trigger warnings had us cringing as we giggled. In other words, much like Adult Swim, enthusiasts of a certain herb will probably enjoy the show the most. A young, talented and queer-inclusive cast that features Jaboukie Young-White, Billy Porter, Yvette Nicole Brown, Peter S. Kim, Zoey Deutch, John Leguizamo, Kiersey Clemons and Skyler Gisondo adds to the appeal. Give it a try and embrace the weirdness.

The Giggle: The Estate

Speaking of weird humor, this dark comedy arrives on digital this week, bringing with it a tale of betrayal, murder and way too many crossed boundaries. Actor Chris Baker stars as George, the spoiled gay son of an emotionally distant, aging bazillionaire named Marcello (Eric Roberts). George forms a friendship with his stepmother Lux (Eliza Coupe), in part because they’re close in age, and in part because she’s also a gold-digging narcissist. When the pair cross paths with self-proclaimed, ever flirty hitman Joe (Greg Finley), the three plot to bump off Marcello…and form a very weird sexual triangle that threatens to derail the whole thing.

The Estate borrows from classic noir thrillers like Body Heat and Double Indemnity, repurposing their ingredients into broad, dark humor. The film also adds a hearty dose of gayness to boot, though George isn’t exactly the kind of greedy, basic gay we like to root for. Throw in a supporting turn by Heather Matarazzo, and the movie has enough going for it to warrant a viewing. As with all black comedy, audience reactions will vary by taste. We found this one most peculiar.

In select theatres and on VOD October 22.

Also arriving on digital this week: producer Jordan Peele’s revival of Candyman, which updates the 90s classic to the modern-day with mixed results. This semi-sequel follows Alexander (Yahya Abdul-Mateen II), an artist obsessed with the legend of the Candyman—that is, a different but similar Candyman than the killer depicted in the original film. Of course, as his research continues, the bodies begin to pile up…and Alexander begins to exhibit signs of demonic possession by the Candyman himself.

We salute this new Candyman for its inclusion of queer characters who, fortunately, exist to do more than just get killed off. We also heap praise on an unhinged performance by gay actor Colman Domingo, who manages to rattle off most of the movie’s exposition with magnetic charisma. He’s the absolute best thing in the film, though a cameo by original film star Vanessa Williams comes in a close second. The ending of the movie doesn’t quite work, and comments on contemporary issues such as police violence, gentrification and systemic racism don’t always fit with the established mythology of the series. We also miss the erotic subtext that permeated the original film. That said, mainstream horror seldom gets this relevant, stylish or fun. We recommend it for the fun, the thoughtfulness, and especially for Domingo. His is a star on the rise.

The Exclusive Part I: The Eyes of Tammy Faye

The Eyes of Tammy Faye features a fantastic performance by Chastain in the title role—she’s likely to lead this year’s Best Actress Oscar race. Garfield too does a fine job as Jim, and leans into the rumors of the pastor’s bisexuality. More importantly, it pays tribute to a woman who made a brand out of unconditional love, especially toward queer people at a time of extreme homophobia. We recommend it for the performances and for spotlighting a remarkable woman who did something even more impressive: she actually practiced the Christian value of love.

We even scored an exclusive clip of the cast discussing Tammy Faye’s appeal with the LGBTQ crowd. Watch and learn.

Trans musician Mila Jam celebrates this Halloween with her rendition of “Toxic Love,” the villain song from the animated cult classic Ferngully. Jam portrays the villain Hexxus as part of Hocus Pocus: I Put a Spell on You: The Sanderson Variant, live Halloween benefit for Broadway Cares/Equity Fights AIDS. The premise of the show follows the Sanderson Sisters, as aided by iconic Disney villians, in a search out kids on the internet…presumably to eat them, of course. Jam joins Jonathan Burke, Nick Rashad Burroughs, Tony Award winner Gavin Creel, J. Harrison Ghee, and Todrick Hall among many others in the show. Give the show a watch for a spell and enjoy the mayhem. 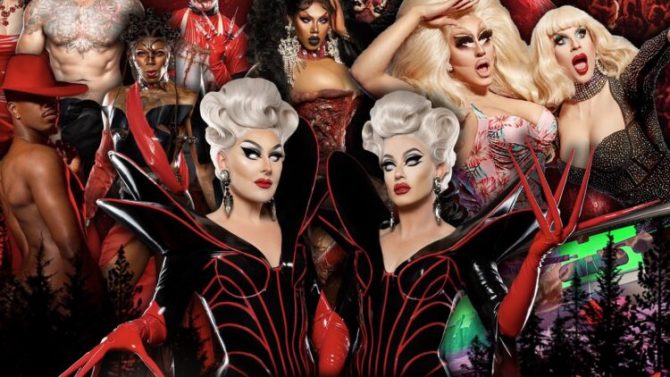 Dragtastic siblings the Boulet Brothers celebrate Halloween this year with the return of their annual costume ball in Los Angeles. This year sees performances by Trixie Mattel & Katya, Jamari Balmian Jacobs and the cast of Legendary, stars of The Boulet Brothers‘ Dragula Season 4 and more. The event, held at the historic Globe Theatre, will also feature three levels of music, DJs, dancers, live performances, a costume contest, puppet theatre, a pumpkin carving studio and interactive actors to add to the atmosphere. Come and stay for a slay. 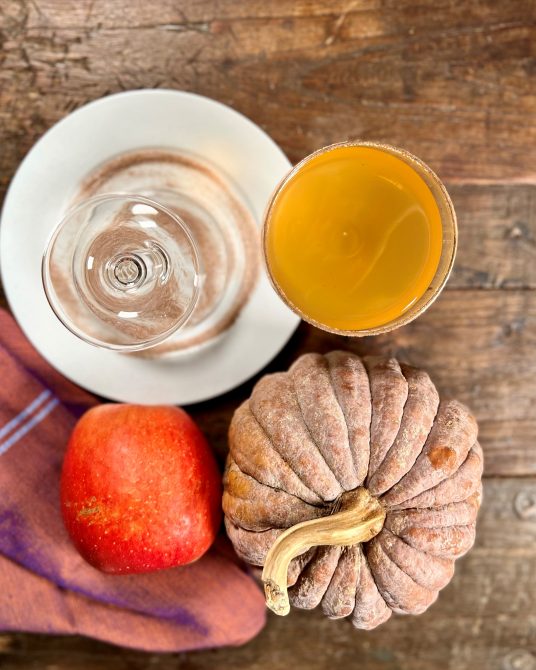 Queer chef Jonathan Bardzik (host of the cooking show Jonathan’s Kitchen) designed this cocktail especially for Queerty, and of course, for our avid readers. It’s a variation on the popular sidecar cocktail.

As Jonathan explains: “A Sidecar — think a brandy margarita with lemon instead of lime — is one of my favorite classic cocktails, not too sweet with the right hit of alcohol. This fall version uses French apple brandy — Calvados — with apple cider, a splash or two of cardamom bitters and a rim dipped in lemon juice and cinnamon sugar. This is the perfect toast from Halloween parties to Thanksgiving celebrations.”

Stir together sugar and cinnamon on a small plate. Uses a lemon wedge to wet the rim of a coupe or martini glass. Dip in cinnamon sugar and turn to coat rim. Strain cocktail into glass to serve.