Netflix dropped this new docuseries last week with little fanfare, which surprises us. Quite simply, Tiger King is the best documentary series the streaming giant has released since Wild Wild Country. The show centers on Joe Exotic, a gay, polygamous, gun-toting, mullet-wearing, self-described redneck with a love for big cats, especially tigers. His story would be enough for a whole series, but Tiger King also introduces several other big cat enthusiasts, including Doc, a combination yogi & ringleader with a cult-like harem of women, and Carol, an Earth-mother hippie who might have murdered her husband. The show has everything: heists, organized crime, sex, drugs, cults, murder, mysteries and plenty of cuddly animals. Give it one episode, and you’ll be hooked.

Currently terrifying audiences on VOD, Swallow debuted earlier this month and my turn into one of the year’s biggest sleeper hits. The movie centers on Hunter (played by Hayley Bennett), a plucky housewife who has everything: a beautiful home, a very hot husband, and a life of luxury. When she becomes pregnant, Hunter can’t resist the temptation to swallow random objects: a marble, a battery, a thumbtack. Despite the pain and risk, she gets satisfaction from the feeling. Needless to say, Hunter has problems, and the tension grows as her addiction rages. Swallow has its share of horror, and takes some surprising turns as Hunter explores her compulsion, and in the film’s third act, her past. Bennett gives a star-making performance in the lead, and character actor Denis O’Hare (True Blood) makes a hell of an impression in a small role. LGBTQ people will no doubt empathize with much of Hunter’s inner struggle, which makes the film all the more terrifying.

Producer/showrunner Jem Garrard smashes the glass ceiling becomes one of the few queer women to head up a live-action science fiction show. Based on the comic of the same name, Vagrant Queen follows Elida (played by the stunning Adryian Rae), a tough girl scavenger in a distant galaxy with a secret: she’s actually the deposed queen of a noble kingdom, on the run from the armies of a despotic Republic. Along the way, she teams up with a few other galactic misfits and tries to avenge the death of her mother. Vagrant Queen has serious Guardians of the Galaxy and Fifth Element vibes with its neon colors, sarcastic humor and occasional winking to the audience, along with the camp of Doctor Who. Couple that with a hefty helping of queer characters (an all-male strip poker game appears in the first episode), and Vagrant Queen has enough reasons for us to recommend the show…even if we’re still not quite sure where it’s going.

The Jam: Highly Suspect’s “These Days”

Something about living under coronavirus lockdown has us in the mood for a good old raging rock song. The band Highly Suspect has just provided one. “These Days” channels the garage band grunge of the 90s in the best possible way. The song focuses on family secrets, as does the accompanying video which features Tony Cavalero of Righteous Gems. Crossdressing, closet cases, food fights and general cabin fever all play a role, making the song timely if nothing else. Besides that, it also includes one of the best rock lyrics in recent memory: “You’re saying that you wish that I was playing with your butt? I guess you can come over.” Who hasn’t been there…

In a more pensive vein, Scottish crooner ONR has dropped the video for his tune “Human Enough,” a song about insecurity, inadequacy and dehumanization in a technology-driven era. While the video channels movies like Blade Runner, the song itself plays like a hybrid of 80s New Wave rock and circuit party techno. Those genres shouldn’t work together as well as they do, but “Human Enough” fuses them into an irresistible pop song suitable for dancing in the living room, or a chill session on the couch. 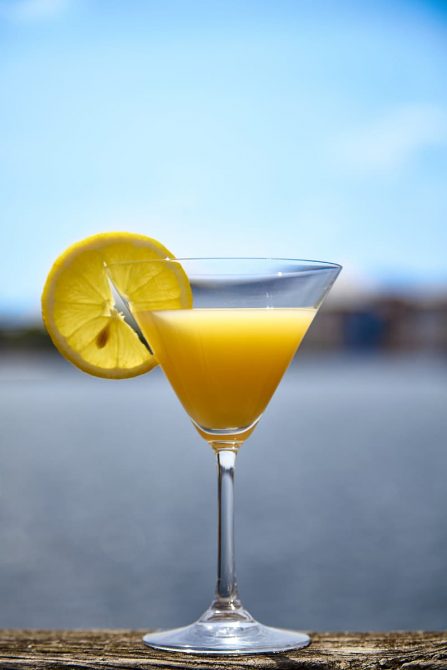 In honor of Tiger King, we offer up this tasty citrus martini with a bourbon base. The extra vitamin c will help the immune response during the ongoing quarantine, while the liquor will only enhance the viewing of the bonkers series.

Mix ingredients in a martini shaker with ice. Shake well and strain.