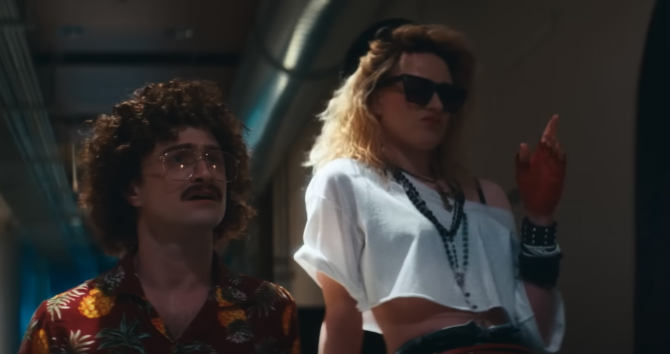 Madonna already has a buzzy biopic on the way, but the Queen Of Pop’s star shines so brightly that now she’s stealing the spotlight in another biopic entirely.

Yes, Weird: The Al Yankovic Story is nominally all about the accordion-toting song satirist (his name’s in the title), but the film’s new, full-length trailer gives an awful lot of screen time to Madge and her apparent “bad influence” on Yankovic.

Produced by Funny Or Die and coming this fall to The Roku Channel, of all places, Weird finds Daniel Radcliffe donning a curly wig and countless Hawaiian shirts to play the comedic musician. By telling the story of Yankovic’s “troubled” childhood and “tumultuous” rise to fame in melodramatic fashion, the film sets out to parody the music biopic subgenre to wonderfully weird ends.

Related: Wait, is Daniel Radcliffe about to make us thirsty for Weird Al? Help! We’re confused

But no matter how hard Radcliffe’s abs might try to steal our attention (and they are trying—really, really hard), this new clip is all about Madonna. Played here by Evan Rachel Wood in full Like A Virgin-era attire, the icon comes knocking on Yankvoic’s door to ask if he’ll parody one of her songs. But all the business talk goes out the door rather quickly…

“I was wondering if you were going to do a parody of song, ‘Like A Virgin’?,” she asks.

“Yes,” Wood’s Madonna answers cheekily. “Except for the fact that I’ve had a lot of sex.”

Related: Every one of Madonna’s #2 singles ranked

And this doesn’t appear to be just a one-scene cameo. As in any good music biopic, Yankovic’s rocketing success comes with more than a few personal demons: Alcohol, drugs—you name it. As Al’s manager (Rainn Wilson, in a top hat for some reason) sees it, it’s all Madonna’s fault. “I think Madonna’s a bad influence on you!”

This is, of course, the exact kind of absurdist truth-stretching we’d expect to see from a Weird Al biopic that Weird Al himself has signed off on (and stars in). But does Madonna know she’s become the villain of Yankovic’s story?

Related: Hello, boy toys! Our dream cast for who should play Madonna’s lovers in her upcoming biopic

Either way, Wood’s offering up a pretty solid impression of her! At least better than you might expect from a movie-length parody sketch. She might even give Julia Garner’s Madonna-approved performance a run for its money!

Between all the abs and the emphasis and Madonna, one might wonder: Is Weird queerbaiting? Well, when being pandered to looks this fun, we certainly don’t mind.

Weird: The Al Yankovic Story premieres next month at the Toronto International Film Festival before making its streaming debut November 4 on The Roku Channel. You can watch its first full trailer below.