The Step Out: The Addams Family

The family purveyors of all things creepy, spooky, cookie and ookie return to the big screen, this time, an a hyperstylized animated form. It fits well. Oscar Isaac and Charlize Theron star as Morticia and Gomez Addams, the heads of the titular fam whose values come into conflict with an uppity TV host, played by Allison Janney. We find a romp with the Addamses hard to resist, though with a cast that includes Bette Midler, Chloe Grace Mortiz, Titus Burgess and Catherine O’Hara, we simply can’t say no to this new incarnation.

The Coming Out: Ellen – The Puppy Episode

In honor of Coming Out Day, we suggest taking a rewind down memory lane to the groundbreaking, watershed moment in television history that ushered in the modern era, at least as far as LGBTQ people are concerned. There would be no Will & Grace, Queer as Folk, The L Word, Pose or even Glee without Ellen, Ellen DeGeneres’ hilarious sitcom, or its most important entry, “The Puppy Episode.” Despite the title–which was kind of the point at the time–the episode features DeGeneres’ Ellen Morgan coming out of the closet–the first for a leading sitcom character. Laura Dern guest stars as a beautiful woman who turns Ellen’s eye, while Oprah Winfrey turns up as a therapist helping Ellen to grapple with her feelings. It also helps that, besides all the historical significance, the show is damn funny, enough so that it won DeGeneres and her writers an Emmy. For all the showbiz woes DeGeneres suffered in the wake of her own coming out–and how much her hilarious show now goes unacknowledged–the least we can do is honor the moment she said “I am” in front of millions of people.

Screen star Montgomery Clift remains one of Hollywood’s all-time great hunks, which is saying something. We covered this documentary from husband and wife directors Robert Clift (nephew of Monty) and Hillary Demmon when it premiered last year, and applauded its revealing look at what amount to family secrets for the two directors. Making Montgomery Clift doesn’t shy away from portraying the eccentricities of the Clift clan, the fabled star’s drug use, or his secret life as a gay man. In perhaps the film’s most moving touch, Making Montgomery Clift also reveals the longtime love affair between Clift and his “nurse” Lorenzo James, and why James, as an African-American man, became a footnote in Clift biographies, but a major and lasting part of his family.

Netflix just dropped this new reality show hosted by Cardi B., a sort of hip-hop answer to American Idol. Rhythm & Flow searches to find new talent in the rap scene in a similar fashion. This first season even features an out-gay rapper, Cakes da Killa, making his debut in episode two. We won’t spoil much beyond that, other than to say that Cakes and his fellow competitors have some extraordinary lyrical skills, and that Rhythm & Flow’s makes a welcome variation on the Idol format, even one-upping it by allowing artists to present their own material.

Speaking of new material, out singer-songwriter Kris Kelly just dropped this new video this week, a mournful orchestral track about a couple in an open relationship destroyed by their own vices and lack of responsibility for one another. The accompanying animated video feels like a mix of Salvador Dali and The Star Wars Holiday Special—and we mean that as a compliment. The images have a surreal, haunting quality about them, offering a perfect counterpoint to the music, both sad and beautiful.

The Anthem: “Sing Out”

Popstar Lisa Loeb drops her latest single, the first from her new record due out next year. Loeb penned “Sing Out” as a love letter to queer people, especially her fans who have impressed her so much by living authentic lives. Less a “Born this Way” type fiesta than a “True Colors” lighter-flicking hymn, the song celebrates the importance of self-acceptance, community and taking pride in yourself. Loeb has compared the tune to “If I Could Teach the World To Sing” which launched a new era of Kumbaya-type togetherness, which in these trying times, feels all too needed.

The Read: Beautiful on the Outside

Adam Rippon opens up about his life and career on the ice in his new memoir and, to say the least, it is a far cry from the glamour and luxury typically associated with sports stars. Besides detailing his own coming out experiences and the trappings of fame, Rippon describes his early years on the ice, living in poverty, the pressures to look, sound, and act a certain way and his subsequent Olympic glory. As with his public persona, Beautiful on the Outside also contains plenty of Rippon’s sassy humor and personality, enough so to make the memoir a more than an entertaining read.

Available on Amazon and from book retailers October 15.

The Sip: The Morticia 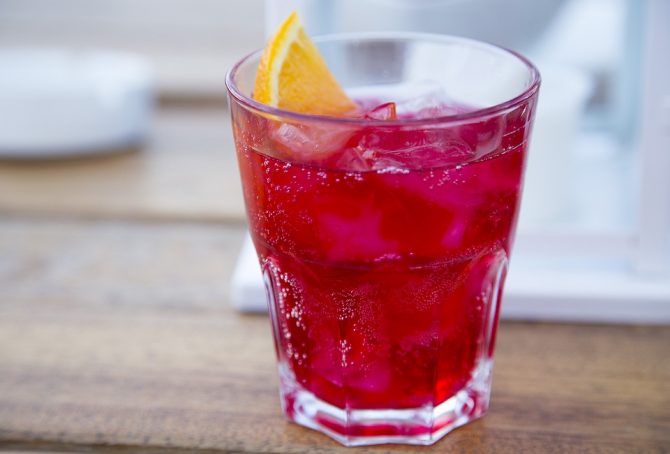 So once again in honor of Ms. Addams, have a sip of this red and wild vodka martini certain to make you feel bit ookie yourself.

Mix together in a shaker over ice. Shake and serve.