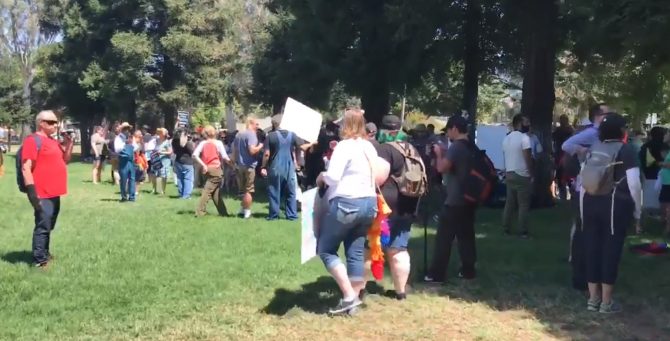 Finally, after all the hype, arguing, dubious reasoning and muck-slinging, Straight Pride arrived in Modesto, CA this weekend…and only attracted 20 participants. Far outnumbering the supporters of Straight Pride were the counter-protestors of the white supremacist-sponsored event, which numbered in the hundreds.

Since the initial announcement of Straight Pride in Modesto, as organized by a homophobic mom and a racist man, the event has invited disgust and ridicule. When the city council denied use of a local park for the event over insurance concerns, organizers pressed on by adopting a new venue for their rally: Planned Parenthood. Because nothing says heterosexuality like attacking family planning.

Related: Straight Pride organizer insists event will take place, even after the city council blocked it

Around 200 protesters gathered outside Planned Parenthood to counter the Straight Pride rally, drowning out the main event. Another 250 protesters also gathered in nearby Ensen Park to give speeches decrying the event, including remarks from city councilman Mani Grewel.

Dozens of people gather in front of the Planned Parenthood office in Modesto. We are seeing a lot of anti-straight pride protesters here. We were hearing at one point there were straight pride parade organizers at this location but so sign of them. Lots of police @CBSSacramento pic.twitter.com/q1wW6sEnQM

“For every step, someone takes to come and divide our community, spread hatred, spread bigotry this many people are standing on guard to make sure it doesn’t happen with thousands more,” Grewel said.

A similar event in Boston has invited similar criticism, particularly after organizers of the event were revealed to be members of the Proud Boys, a white nationalist organization.