Is this damn pandemic over yet?

Thank goodness for movies and TV, which have helped us keep sane during this ongoing period of lockdown and social distancing. In some cases, they’ve replaced actual humans as our friends and lovers. No, we’re not going to elaborate on that one.

With Fall officially here and the holiday season creeping ever closer, we anticipate meeting up with a group of returning friends, and a few new ones to boot. From epic sci-fi to over-the-top horror, these titles all feature some of our favorite performers, and compelling stories to keep us interested.

Ryan Murphy & Sarah Paulson return to their American Horror Story roots with this grand Guignol thriller which reimagines the origins of Nurse Ratched of One Flew Over the Cuckoo’s Nest. Expect a hearty dose of gayness alongside all the mayhem. Sharon Stone, Finn Whitrock, Judy Davis, Jon Jon Briones, Charlie Carver and Vincent D’Onofrio also star.

Janelle Monae takes on her most significant role to date in his horror thriller from gay directors Gerard Bush and Christopher Ren. Antebellum sees Monae step into the role of Victoria, a successful career woman with a mysterious connection to Eden (also played by Monae), a woman held captive by Confederate soldiers on a plantation. Gabourey Sidibe, Jenna Malone, Tongayi Chirisa, Lily Cowles and Jack Houston also star.

The Boys in the Band

The much-anticipated update of the controversial, if classic, Mart Crowley play about gay men in the 60s finally arrives on Netflix this fall, bringing the esteemed, all-gay cast from the Broadway revival with it. As with said revival, Joe Montello directs. The new film will also feature a screenplay by Crowley who revised his original text for the 2018 revival to remove a few topical references…and hopefully drop some of the play’s self-loathing homophobia as well.

The wacky, outrageous comedy returns for a second helping on Hulu this season. Creator/stars Mya Erskine and Anna Konkle return to their roles as Maya & Anna (though both actresses are in their 30s—the central conceit of the show), two hapless 13-year olds trying to make their way through middle school. Expect plenty of early-2000s vintage tunes and drama involving AOL Instant Messenger.

The show that finally introduced canonical queers to the Trek franchise returns for Season 3 this year, upping the ante on the stakes—and the LGBTQ visibility. Last season found the crew of the Discovery catapulted 1,000 years into the future, and to a Federation in ashes. They also happen upon a pair of new characters, played by Ian Alexander and Blu del Barrio, neither of whom conform to gender norms, at least by 21st century standards. Can the Discovery restore utopia to the quadrant? We can’t wait to see.

Possibly the most overlooked fantasy series on streaming right now, Season 2 of His Dark Materials arrives this November, bringing with it some of the novel series’ most audacious—and LGBTQ themed—moments. That includes the gay angel Balthamos, who must help the plucky kids Lyra (Daphne Keene) and Will (Amir Wilson), leap from universe to universe in hopes of eluding the rampaging Magisterium. Yes, you read that correctly: the series will have a gay angel in a recurring role. It’s worth it to watch just for that one. More importantly, though, the ever-hot Andrew Scott joins this season as a series regular. Call that a win-win.

Timothee Chalamet takes on his biggest role since Call Me By Your Name with this sci-fi epic from Dennis Villeneuve (Arrival, Blade Runner 2049). In the movie, Chalamet plays Paul Atreides, the 15-year-old heir to the esteemed House Atreides, one of the ruling houses of the universe. Dune introduces a galaxy in which all space travel relies on a mysterious spice to traverse the distances between worlds, and the titular sand planet where giant worms roam. Beyond that, Dune gets a bit complicated to explain here; the plot involves lots of infighting between ruling houses, spice mutations, prophecies involving a super-being and a wicked Baron hellbent on destroying the Atreides. Trust us, it’s worth it. Oscar Isaac, Jason Mamoa, Stellen Skarsgard, Rebecca Ferguson and Zendaya also star. 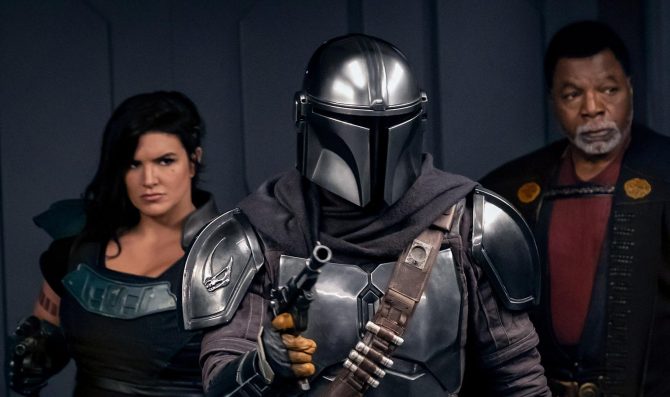 Still burned from the awfulness of Rise of Skywalker? Us too. Fortunately, the extreme quality of The Mandalorian helped balm our burns last year. We look forward to even more this year, as Season 2 finds the mysterious Din Djarin (Pedro Pascal) and the Child (better known as “Baby Yoda”) crossing paths with the legendary bounty hunter Boba Fett (Temuera Morrison), and (allegedly) the fallen Jedi Ahsoka Tano (Rosario Dawson), former apprentice of Anakin Skywalker. In short, we can’t wait.

No Time To Die

Stephen King’s magnum opus about a global pandemic that upends society (sound familiar) gets the uncensored, limited series treatment courtesy of CBS All Access. For the uninitiated, the epic novel concerns a diverse group of Americans living through a plague that wipes out 99% of the world population. The few survivors then begin to have dreams about an elderly prophetess and a demon, each calling out to the survivors to join their movement. What begins as a fight to survive becomes the ultimate standoff between good and evil. We’ll not reveal what side the queers land on here, but if the series does the book justice, expect to see us represented in the story. James Marsden, Alexander Skarsgard, Whoopi Goldberg, Amber Herd, Jovan Adepo, Heather Graham and Greg Kinnear star.