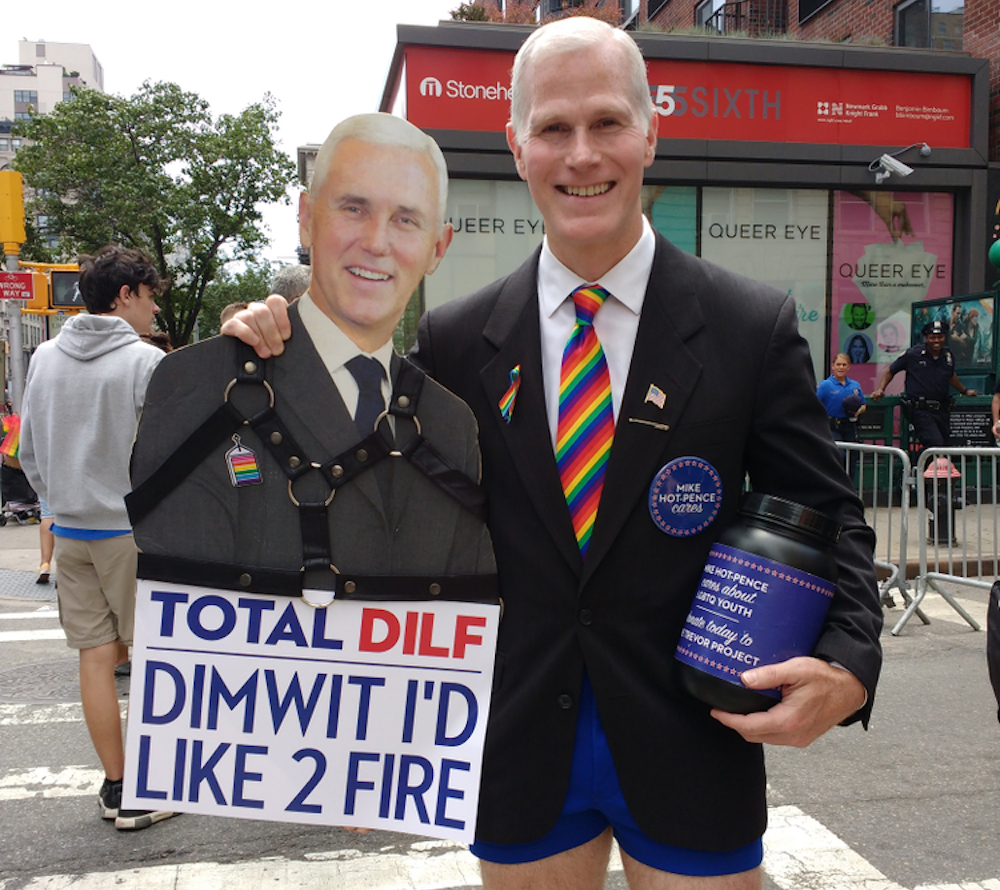 Mike Pence is known foremost for his vicious hatred of all things LGBTQ.

But when we’re not busy being horrified by his desire to jail same-sex couples or “converting” us out of existence or using the Bible as a pretext for firing queer employees, we’re enjoying the delicious comeuppance that fellow politicians, pundits, comedians, queer people and even Trump himself rain down upon him on a regular basis.

It’s often said that the religious right lives in a parallel universe where cherry-picked biblical verses written hundreds of years ago pass for morality. Pence’s story is a great example of what happens when that parallel universe is regularly punctured.

Here are 6 of our favorite times Pence got some smackdown.

Pence was assigned to lead the U.S. delegation of athletes during the 2018 Winter Olympics in Pyeongchang, South Korea. And when the gay Olympic figure skater found out about it, he said that Pence wasn’t a suitable choice to lead the delegation and added that he wouldn’t want to meet with him at the pre-Games meet-and-greet.

“You mean Mike Pence, the same Mike Pence that funded gay conversion therapy? I’m not buying it. I don’t think he has a real concept of reality. To stand by some of the things that Donald Trump has said and for Mike Pence to say he’s a devout Christian man is completely contradictory.”

“If he’s okay with what’s being said about people and Americans and foreigners and about different countries that are being called ‘shitholes,’ I think he should really go to church.”

Pence’s press secretary, Alyssa Farah, responded, “[Rippon]’s accusation is totally false and has no basis in fact. Despite these misinformed claims, the vice president will be enthusiastically supporting all the U.S. athletes competing next month in Pyeongchang.”

But despite Rippon’s actually quite true allegation, Pence then tried to arrange a private meeting with Rippon, and Rippon basically answered, “No means no.” Rippon then added that he wouldn’t attend the athletes’ customary trip to the White House after the Games ended.

Despite all this, Pence kept calling news reports about their feud #FAKENEWS via Twitter. And he came out looking like a big loser while Rippon emerged as a media darling whose composure, wicked wit, and beautiful skating just underscored that he’s a better man than Pence could ever be.

By denying the news, subtweeting Rippon and trying to arrange a meeting, Pence looked like an obsessive troll distracting an American hero while Rippon went about winning a medal on the world stage. Yet Rippon handled it with aplomb — an Olympic sized smackdown indeed.

2. When a young bi woman threw a pride event in Pence’s hometown

I’m gay for this guy in his “I’M GAY FOR MIKE PENCE” t-shirt. #ColumbusPrideFestival

While serving as Governor of Indiana, Pence tried to legalize religious-based discrimination statewide (and people across the state know that). So Erin Bailey, a bisexual high schooler, decided to knock his anti-queer legacy by organizing a Pride festival in his hometown of Columbus, Indiana, for her senior project.

“I wanted to do something that would impact the community in a really big way,” she said, adding that Pence “definitely” factored into her decision on where to hold the event.

“I thought since everyone else is like, ‘Mike Pence is from here,’ typically it is a conservative community but the LGBT community is here too. I wanted to show them ‘You’re not alone. There are others like us.’”

3. When Pence was forced to dine with a powerful gay couple at his home

Among a veep’s other responsibilities, he has to play host to foreign guests and world leaders, especially since Trump is often busy with “executive time.” (Playing golf and watching Fox TV.) So when gay Irish Prime Minister Leo Varadkar and his boyfriend, Mike Barrett, visited last March, Pence was forced to host an awkward breakfast for the ‘mos in his residence at the US Naval Observatory before attending a St. Patrick’s ceremony at the White House.

Varadkar called it a “lovely morning” and thanked Pence for the “warm reception,” but Barrett was noticeably absent from the ceremony later on. The partner of the Irish PM customarily stands on the dais during the ceremony when the PM presents a shamrock to the U.S. president on behalf of the people of Ireland.

Despite Barrett’s absence, Varadkar got a dig in at Pence and Trump’s politics during his ceremonial speech.

He said, “I stand here this morning as leader of my country, flawed and human, but judged by my political actions and not by my sexual orientation or my skin tone or my gender or religious beliefs. And I don’t believe my country is the only one in the world where this story is possible. It is found in every country where freedom and liberty are cherished.”

As in, “If your leaders judge me by my sexual orientation, they don’t really value freedom or liberty,” right Pence?

4. When Trump belittled Pence for his homophobia at a meeting with a legal scholar 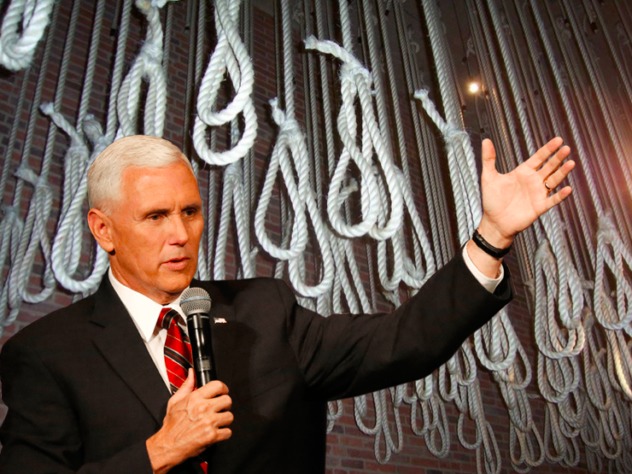 In October 2017, The New Yorker published a profile of Pence that included details of a meeting with Trump and a legal scholar. The scholar was advising them on how to roll back the rights of women and sexual minorities. Nice.

First, Trump mocked Pence’s desire to overturn Roe v. Wade after the scholar told them that overturning the abortion ruling would simply ensure that states would legalize it on their own.

“You see?” Trump said, “You’ve wasted all this time and energy on it, and it’s not going to end abortion anyway.”

When the conversation turned to gay rights, Trump motioned toward Pence and joked, “Don’t ask that guy — he wants to hang them all!”

In one withering comment, Trump told the scholar to ignore his second-in-command’s homophobic impulses and mocked them as barbaric and ridiculous. Granted, Trump’s own more secretive and passive anti-queer hatred is horrid in it’s own way too, but it’s somewhat delightful hearing that he still considers his veep’s hatefulness as laughably dumb.

After the article was published, lying liar White House Press Secretary Sarah Sanders called it pure fiction, but The New Yorker said it interviewed 60 sources for the piece including “multiple people” who were in the room when the comment happened. Even Pence’s own spokespeople wouldn’t deny that Trump had made the comment.

In March 2018, Pence’s daughter Charlotte wrote a children’s book entitled, Marlon Bundo’s A Day in the Life of the Vice President, illustrated by Mike’s wife Karen (who is a piece of work all her own).

The book follows the VP’s real-life pet rabbit, Marlon Bundo, as he joins the veep in the Oval Office, the Senate, the Naval Observatory and then Pence’s bedroom while the VP reads the Bible and prays before bed.

Not content to let this promotional piece of children’s lit go unchallenged, comedian John Oliver and his staff published a parody entitled A Day in the Life of Marlon Bundo.

In their book, Bundo meets and falls in love with a boy bunny outside the VP’s home. Later on, a stink bug who resembles Mike Pence forbids them from marrying, but the other animals disregard him and the marry them anyway.

It was insulting enough to characterize Pence as a smelly pest, but to add injury onto insult, the parody children’s book went on to outsell the Pences’ original book — even Pence’s own daughter bought a copy. Furthermore, all its proceeds went to The Trevor Project and AIDS United to support queer youth and fund HIV treatment and prevention, two things Pence notoriously dislikes.

6. When Pete Buttigieg continually called out Pence and his wife’s queerphobia

Buttigieg then went deeper, saying, “[Pence’s] interpretation of scripture is pretty different than mine to begin with. My understanding of scripture is that it’s about protecting the stranger and the prisoner and the poor person and that idea. That’s what I get in the gospel when I’m at church and his has a lot more to do with sexuality.”

Later on, Buttigieg continued criticizing Pence’s bigoted brand of beliefs: “I wish the Mike Pences of the world would understand, that if you have a problem with who I am, your quarrel is not with me. Your quarrel, sir, is with my creator.”

Pence’s wife responded by stating, “In our country we need to understand you shouldn’t be attacked for what your religious beliefs are,” completely ignoring the fact that Buttigieg is actually criticizing Pence’s queerphobic social policies rather than his beliefs — something she got endlessly dragged on Twitter for.

Pence himself tried to fire back with this butthurt sentiment: “I worked very closely with Mayor Pete when I was governor of the state of Indiana. We had a great working relationship. He said some things that are critical of my Christian faith and of me personally. He knows better. He knows me.” Pence claimed that Buttigieg was only criticizing him to distinguish himself in a crowd of other Democratic competitors.

But then Buttigieg zinged Pence right back by stating, “People will often be polite to you in person while advancing policies that harm you and your family. You will be polite to them in turn, but you need not stand for such harms. Instead, you push back, honestly and emphatically. So it goes, in the public square.”

We enjoy Buttigieg riling up the Pences almost as much as we enjoyed openly gay Representative Brian Sims welcoming Pence to Pennsylvania by flipping him the bird.