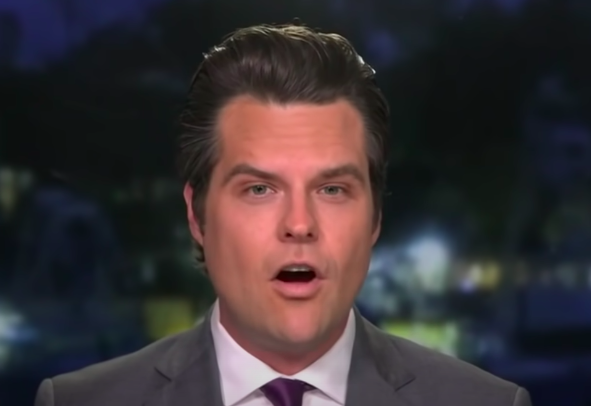 More bad news for Rep. Matt Gaetz of the great state of Florida.

Multiple media outlets are reporting that the Justice Department has begun looking into potential obstruction of justice connected to the ongoing investigation into the antigay lawmaker and his alleged sexual relationship with a high school girl.

According to two people familiar with the matter, federal investigators’ concerns over efforts to obstruct the probe date back to at least last fall, when the examination of the Florida Republican was not yet public knowledge.

One of the people said investigators have been told about Gaetz and an associate discussing a plan to talk with Gaetz’s ex-girlfriend in October 2020 about the ongoing sex crimes investigation. Investigators have also been provided material about the alleged discussion, the person said.

According to Politico, the feds are specifically looking at a phone call Gaetz and his ex-girlfriend had with an unnamed witness in the sex trafficking investigation. They’re trying to determine whether the he pressured the person, who later ratted him out to prosecutors, to lie or give misleading testimony.

Both Gaetz and his ex’s personal cellphones were seized by investigators back in December. It’s unclear whether the devices were ever returned to them, but he reportedly changed his number shortly thereafter.

Related: The feds have Matt Gaetz’s iPhone and friends say his ex-girlfriend is freaking out

After this latest development, a spokesman for Gaetz has issued yet another statement declaring his innocence and accusing investigators of being on a politically motivated witch hunt.

“Congressman Gaetz pursues justice, he doesn’t obstruct it,” the statement alleged. “The anonymous allegations have thus far amounted to lies, wrapped in leaks, rooted in an extortion plot by a former DOJ official. After two months, there is still not a single on-record accusation of misconduct, and now the ‘story’ is changing yet again.”

Meanwhile, Gaetz’s ex is said to be negotiating an immunity deal which she will likely sign by the end of the month.