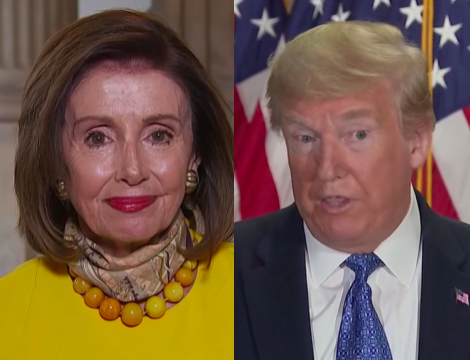 It all started on Monday night, when Pelosi was asked by Anderson Cooper about Trump’s alleged use of hydroxychloroquine as a preventative treatment for coronavirus.

“I would rather he not be taking something that has not been approved by the scientists,” she said. “Especially in his age group and in his, shall we say, weight group. Morbidly obese, they say. So, I think that it’s not a good idea.”

Within minutes, the words “morbidly obese” and #PresidentPlump were trending on Twitter.

When asked about Pelosi’s off the cuff remark yesterday afternoon, Trump tried to brush the whole thing off by pretending he couldn’t care less what she had to say about him.

But not five minutes later, he was red in the face ranting and raving about being called morbidly obese on live TV by the most powerful woman in the country, saying she is a “sick woman” with “a lot of mental problems.”

“She’s got a lot of problems, a lot of mental problems,” Trump raged. “They have to get their act together for the good of the country, OK?”

President Trump: "Pelosi is a sick woman. She's got a lot of problems. A lot of mental problems." pic.twitter.com/pcVUxLG3Zk

Then last evening, Pelosi appeared on MSNBC’s Deadline White House, where she told Nicolle Wallace she “had no idea” Trump would be so bothered by her comment.

“I didn’t know that he would be so sensitive,” the Speaker said. “He’s always talking about other people’s … weight, their pounds.”

Related: Nancy Pelosi ripped up Donald Trump’s State of the Union address. And now, the memes…

Then she added this little zinger: “I think he should recognize his words weigh a ton.”

She continued, “Instead of telling people to put Lysol into their lungs or taking a medication that has not been approved except under certain circumstances, he should be saying what your previous guest mentioned, things that would help people.”

Talk about throwing fuel on a dumpster fire. Trump has not yet commented on Pelosi’s latest jab, though we’re sure he will shortly.

Quick fact check: To be considered “morbidly obese,” a person must have a body mass index of over 40. According to his February 2019 annual physical report, Trump stood 6’3 and weighed 243 pounds, putting his BMI at 30.4, which makes him obese, but not morbidly so; however, the accuracy of that report, like so many of Trump’s claims, has been questioned.

Related: Nancy Pelosi just gave the most epic clapback to a reporter who accused her of hating Trump