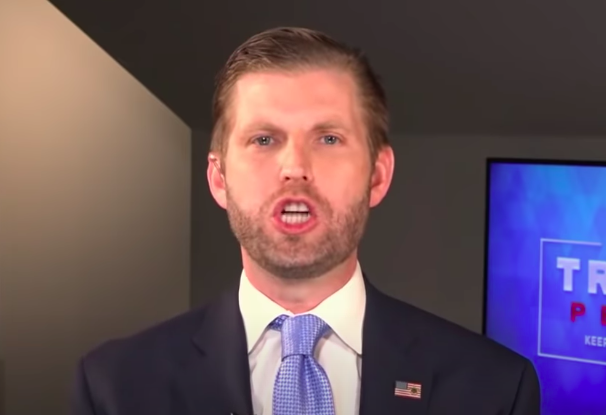 How did you spend Thanksgiving? Eric Trump spent his holiday attacking people on Twitter for talking about that time he was accused of stealing money from kids with cancer.

Quick backstory: In 2017, Eric’s charity, the Eric Trump Foundation, was accused of funneling $1.2 million worth of donations intended for St. Jude Children’s Research Hospital into his family’s golf courses. The foundation also allegedly funneled another $500,000 into other charities connected to Trump family members or interests.

When someone reminded Eric of this uncomfortable fact on Thanksgiving Day, the 37-year-old lashed out, tweeting: “By the age of 30, I raised 25 million dollars (at a 9.2% cumulative expense ratio) and built the most state-of-the-art Intensive Care Unit & Surgery Center, dedicated to children, on earth. Don’t ever attack philanthropy especially when you have probably done shit in your life.”

By the age of 30, I raised 25 million dollars (at a 9.2% cumulative expense ratio) and built the most state-of-the-art Intensive Care Unit & Surgery Center, dedicated to children, on earth. Don’t ever attack philanthropy especially when you have probably done shit in your life. https://t.co/57hFldA78w

According to Politifact, however, Eric’s claim is entirely false. He did not raise $25 million for pediatric cancer treatment and research. Publicly available tax records show he raised between $8.7 million and $16.3 million for St. Jude (the exact amount is unclear), which would’ve been really great… had he not taken a huge cut for his family.

Funny how you didn’t deny the theft…

Aw, you literally woke up on Thanksgiving Day and decided to attack someone speaking the truth. What an inspiration you are

Totally off topic but still….. pic.twitter.com/yMSxKuPbN3

That’s not what any of the reporting says. If you’re going to go around telling everybody what an amazing person you are and the charitable things you’ve done, get it right.
By the way, bragging about charitable acts is gross.

Cool story, bro. Did you tweet this from your burner phone, or did you snatch a phone from some poor kid with cancer? 🤔 pic.twitter.com/zwogkeOClX

Then why are you banned from running a charity in NY?

Sure, Eric. It’s also perfectly normal to use a burner phone, right?

No one is attacking philanthropy but we don’t like cheating, grifting n stealing. btw..REAL philanthropists donate THEIR OWN money.

Eric, if you’re so proud stop fighting the subpoenas and tell the authorities investigating your family’s business for fraud, corruption and tax evasion all about the ‘charitable’ work you do.

Last week, Rolling Stone published a bombshell report claiming that Eric had communicated with pro MAGA insurrectionists prior to the January 6 attack on the U.S. Capitol using burner phones.

Related: It sure looks like Eric Trump and his wife are 100% screwed. Happy Thanksgiving!

An anonymous “March for Trump” team member told the magazine, “They were planning all kinds of stuff, marches and rallies. Any conversation she had with the White House or Trump family took place on those phones.”