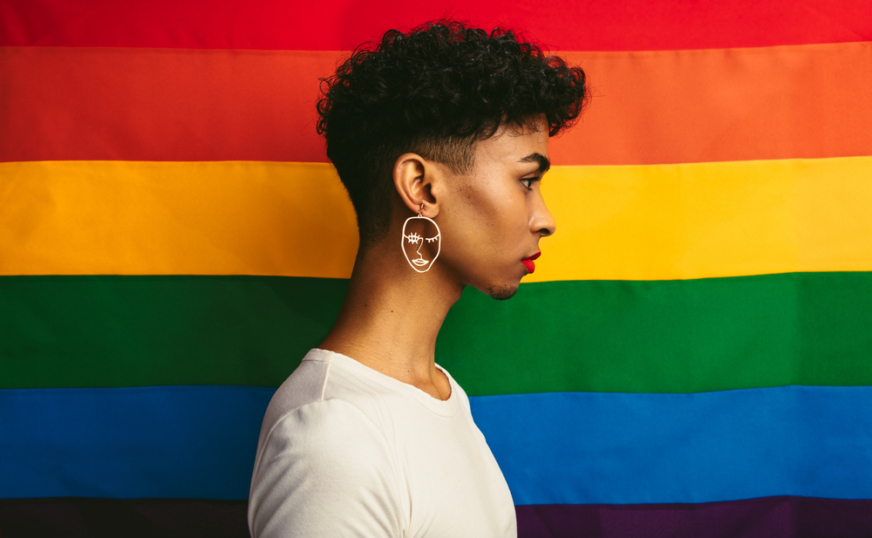 As we’ve covered before, some gays aren’t fans of the word “queer”… and some queer folk aren’t so hot about the word “gay.” The two words aren’t as synonymous as homophobes would have you believe, but that hasn’t stopped those bullies from slinging both words as slurs.

Related: 27 thought-provoking tweets highlighting some of the worst LGBTQ microaggressions

Television writer Bryan Fuller, mastermind of the TV shows Pushing Daisies and Hannibal, was one of the famous figures who responded. “Queer is an inclusive word—that is the reason toxic white gay jocks don’t like it,” Fuller tweeted (in all caps, for emphasis).

Preston Mitchum, Director of Advocacy and Government Affairs at The Trevor Project, observed that the “we” in @CoolRiderr’s post “is doing a lot of work.”

And singer-songwriter Simon Curtis tweeted, “A lot of us enjoy being as inclusive as possible and lean into language that fosters a more welcoming community. Gayness is queerness.”

The debate also played out in the pages of The Guardian last weekend, after the newspaper reported that 15,000 people identified as queer in England and Wales’ latest census. In a letter to the editor published on January 13, reader Karl Lockwood of Brighton objected to that self-classification and said that he finds the term “insulting and derogatory, and certainly not ‘reclaimed.’”

“I am a gay man of 66 years with many friends and acquaintances, and know no one who would refer to themselves as queer,” Lockwood added. “It would seem a small minority of activists has encouraged the media to use the word without considering its offensiveness to many people.”

(Lockwood also likened what he called the “Q word” to the “N word,” which seems like a false equivalence, to put it mildly.)

In a letter sent in response, reader Emma Joliffe of East Sussex pointed out that the word “queer” has been “reclaimed by members of our community since the 1970s,” citing the popular “We’re here, we’re queer, get used to it” as an example.

“We use [‘queer’] to signify our pride, power, and resistance,” Joliffe wrote. “Personally, as a woman married to a woman, and as a feminist, socialist and believer in challenging and changing the status quo, I think ‘queer’ represents me, my life, and my politics better than any other term I might use.

“Rather than policing the terms used by others—especially considering that for millennials, the word they were most likely to hear as a term of abuse was ‘gay’ in the early ‘00s—perhaps Karl should accept that the word, and the world, has moved on.”

The back-and-forth about “gay” vs. “queer” has been all over Twitter in the past two weeks. Here’s a sampling of the discourse (capped off by a zinger from perennial Queerty favorite Jaboukie Young-White).

Thanks for your opinion but it’s a no from me. ‘Queer’ is a lovely, inclusive, empowering and reclaimed word. You don’t have to use it, but you don’t get to tell other queers they can’t. https://t.co/TS3wpv91SM

They can pry “queer” from my cold dead hands. I’m not gay, I’m not straight, I’m just queer. Thanks. https://t.co/nr7riKRbXH

I’m a Gay man and Queer. I am a queer person who is gay. This discourse of “use one instead of the other” is bollocks. I am both, many people are. Queer is not a slur. It can be. So can any other word.

"Queer" is a great alternative to LGBT+. It's quicker to say. It doesn't relegate any identity to the other side of the plus sign. It invites all queer folks to be equal. It's cool being queer.

"Queer is a slur" is *literally* TERF propaganda, but comparing it to the N-word is a new low even for British transphobes. https://t.co/RaphTOkTth

Anyway “queer is a slur” is a dogwhistle for transphobia pushed by old TERFs who hate it for being too inclusive and tricked a whole generation of young people to parrot that thought. It’s been reclaimed since the late 80s, it is common academic. Outta here with this, Guardian https://t.co/2FAPXXtyiL

Yeah, I hate that word! It was a derogative word towards gays originally, but the LGBT community (or rather those who think they run it) decided to adopt it. Don’t know why, no one asked my opinion on the matter and there certainly wasn’t a vote!

Related: David Sedaris ignites a firestorm by saying he dislikes the term “queer” and is now “straight”

LGBA style gays hate the word Queer because it’s as broad as it needs to be to shield everyone under the umbrella, and these gays are all about excluding the Q and the T https://t.co/Rl1HfmiRHE

We're here
We use queer
You've had decades to get used to it until you weaponised it as a covert way to delegitimise trans people and other queers you find undesirable https://t.co/fRYW0W94T3

The move to ban “queer” might seem like a noble mission to older gays who may have first heard the word as a slur, but it’s fundamentally part of a mission to exclude trans people from the community, and it’s not particularly subtle. https://t.co/gqOd2TIrpN

The word Queer is trans inclusive non-binary inclusive, bi-inclusive, etc. It’s an inclusive term in an evolving language. It has empowered and unified many people and groups through it’s reclamation. Wittgenstein said “the meaning of a word is its use”. ?? https://t.co/fIheeeAgu5

Note the attempt to make “queer” into “the q-word”, turning queerness something you shouldn’t say and is an insidious erasure tactic don’t fall for it

Why “queer”? Because queer takes up space. Queer is unapologetic. Queer doesn’t promise assimilation. Queer includes, and makes it harder to drop a letter off the acronym when it’s politically convenient. Queer reminds us to not get complacent. Queer is solidarity.

I’ve noticed most people that use the term queer are the later millennial and z generation that never felt the derogatory and negative emotional impact of that word.

Some folks like the word queer, some folks don’t – it’s okay to be either of these people but we should not be reducing queerness to a word that is hushed in private or reduced to a singular letter.

"gays, do not say queer!!" baby youre late im on faggot now