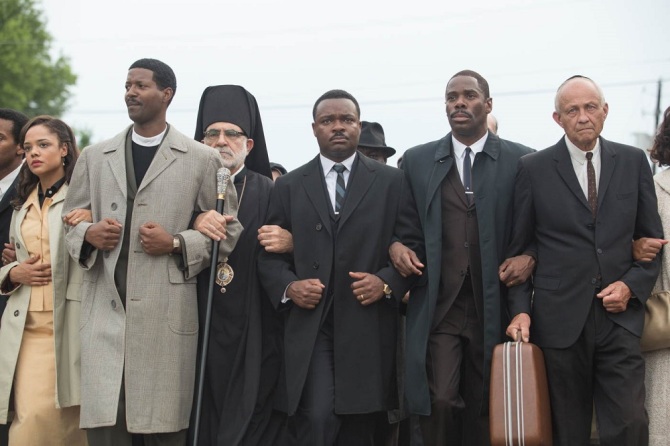 Let’s take a moment on this special day to reflect on Martin Luther King Jr.’s life and legacy. Having survived 2020, a year that saw extreme civil unrest and extended conversation about systemic racism, it seems like a small tribute to pay.

Dr. King inspired us to do channel our passions into progress toward justice. The movies listed here commemorate the struggle for equality in America by reminding viewers of the sweetness of each progressive step toward the American promise, and just how far our nation still has to go to fulfill Dr. King’s dream of true equality.

The movies outlined here commemorate the struggle for equality in America by reminding viewers of the sweetness of each progressive step toward the American promise, and just how far our nation still has to go. While you may sit on the couch watching these, they will no doubt inspire you to head out into the world to make the world a better place.

David Oyelowo plays the good Dr. King in this film, the breakout from director Ava DuVernay. The film dramatizes the lead up to the historic march on Selma, led by King, and also explores the lives of those that made the journey to attend. For all its stirring crowd scenes, though, the best moments in the movie come in quiet, domestic scenes between Dr. King and Coretta Scott King (very well played by Carmen Ejogo) that explores the tenderness—and tensions—of their marriage.

Oscar-winners Hillary Swank and Anjelica Huston star in this HBO film about feminists Alice Paul and Lucy Burns who helped galvanize the women’s suffrage movement and earn women the right to vote. Paul and Burns don’t get as much press as other suffragettes like Susan B. Anthony. This movie finally records their harrowing struggle for posterity.

This ABC miniseries which traces the queer rights movement in San Francisco from the time of Harvey Milk up to the days of marriage equality got something of a raw deal when it debuted in 2017 for some weird casting choices, and for focusing too monomaniacally on one city. That’s a shame: Though flawed, When We Rise does at least hit the high (and low) points in the history of equality. At its best, it captures the harrowing emotions in times of despair…and triumph.

Two screen legends anchor this film about the Brown v. Board of Education Supreme Court case: Sidney Poitier and Burt Lancaster. Lancaster plays lawyer John Davis, while Poitier captures all the fire of Thurgood Marshall, the lawyer who fought to end school segregation and eventually ended up on the Supreme Court himself. Full of electrifying speechifying and courtroom drama, the movie also helps explain the legal maneuvering that goes into prosecuting a major case.

Related: Oscar-Nominated AIDS Doc “How To Survive A Plague” To Become ABC Mini-Series

Speaking of Angela Bassett, the actress also gives one of her best performances in this drama, a biopic of the title character. It helps, of course, that the movie matches her with Denzel Washington as Malcolm. Washington gives the performance of his career here, as does director Spike Lee, who crafts his finest film to date. That folks, says something.

No list of civil rights movies would be complete (in our view, anyway) without including Milk, the terrific drama about the cut-short live of the LGBTQ rights leader. Sean Penn took home an Oscar for his work, as did Dustin Lance Black for his screenplay. Watch with Kleenex on hand; no matter how many times we’ve seen it, we still get weepy.

Gay actor Paul Winfield, an Emmy winner and Oscar nominee, took on the role of Martin Luther King in this 1978 miniseries which scored him some of the best notice of his career. Honorary Oscar winner Cecily Tyson matches him well as Coretta. Even if the style and format of the movie feel hopelessly dated in places, the two leads still bring it to life. That, and Winfield’s uncanny resemblance to the real thing gives the movie undying power.

Boycott tells the story of Dr. King’s other great public demonstration, the Montgomery Bus Boycott. Jeffery Wright slips into the role with his ample talent, while Carmen Ejogo steps into the role of Coretta (yes, she played it twice). Hardly the best film about King, Boycott nevertheless retells an important chapter of the good doctor’s legacy.

Oscar-nominated director Sam Pollard helmed this documentary about the FBI’s monitoring of the good Dr. King during his days as a Civil Rights leader. Back in the 1960s, FBI director J. Edgar Hoover began a clandestine investigation of King as a potential political insurrectionist and a campaign of intimidation aimed at forcing him to temper his activism. Using newly declassified documents, film footage, and interviews with James Comey, Andrew Young, Beverly Gage and Clarence Jones, among many others, Pollard reconstructs the staggering abuse of power on the part of the FBI, and a new level of Dr. King’s resolve to bring about positive change, no matter what the cost.

Cynthia Erivo snagged an Oscar nomination for Best Actress for this biopic of abolitionist activist Harriet Tubman. Harriet portrays Tubman as a superhero of sorts (yes really) devoted to ending the evils of slavery. Director Kasi Lemmons follows Tubman’s rise from a former slave to Underground Railroad conductor, taking on the moniker “Moses” and vowing to defeat the movie’s supervillain, Tubman’s former owner Gideon Brodess (Joe Alwyn). Like every great superhero epic, the movie also gives Tubman a love interest: that of Marie (Janelle Monae) a beautiful boarding house owner. Harrowing, uplifting and magnificently acted by Erivo, Harriet succeeds as an action-packed biopic of an American hero, and a marvelously queer one at that.

I Am Not Your Negro

Samuel L. Jackson lends his voice as the gay writer James Baldwin in this documentary-narrative hybrid. Based on an unfinished work by Baldwin, I Am Not Your Negro explores the sorrow and rage that still hovers over a generation of murdered African-American leaders like Malcolm X and Martin Luther King, Jr. It also assaults the liberal images (dubbed “lies” by Baldwin) of black and white reconciliation and unity in movies throughout the 1950s & 60s.

Brother Outsider recounts the life of Bayard Rustin, one of Dr. King’s closest advisors, and a gay man. As a longtime student of Gandhi, Rustin’s advice led King to champion peaceful protest activism rather than violent uprising. Rustin also conceived of the Montgomery Bus Boycott, one of King’s most successful campaigns against segregation. The film chronicles Rustin’s work with King, as well as how a 1953 conviction for gay sex ultimately derailed Rustin’s association with the Civil Rights giant. Yet even disgrace did not derail Rustin’s work. Brother Outsider sheds light on the man that helped shape two social justice movements: that of African-Americans fighting to end racism, and of queer Americans striving for acceptance and equality.

The shooting of unarmed Michael Brown in Ferguson, Missouri incited riots in the streets and helped launch the worldwide Black Lives Matter movement. Whose Streets? examines the community organizers that helped start the movement, including the LGBTQ activists who helped start a national conversation about police brutality.

How to Survive a Plague

For more gut-wrenching memories of the specter of AIDS and the government inaction that invited an epidemic, look no further than How to Survive a Plague. David France’s epic chronicle of the crisis in New York and the rise of ACT UP leaves viewers stunned and enraged. With indispensable interviews with key activists and witnesses, raw archival footage and a sense of righteous anger, How to Survive a Plague is one of the best docs about the AIDS crisis. Have Kleenex on hand: footage of gay men casting the ashes of their dead friends and lovers on the White House lawn makes us bawl every time.