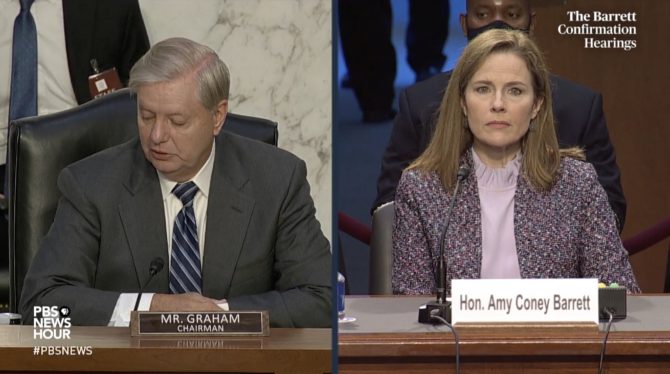 “So we talk a lot about laws legalizing same-sex marriage,” Graham said. “If anybody tried to change that precedent one of the things you would look at is a reliance interest that people have formed around that piece of legislation?”

“So, reaching a decision that the case was wrongly decided doesn’t end the debate in terms of whether or not it should be repealed. Is that correct?” Graham further questioned.

“That is correct,” Coney Barrett affirmed.

“And there is a very rigorous process in place to overturn precedent?” Graham further pressed.

“There is, many factors, reliance being one,” Coney Barrett replied.

“Is there any constitutional right to a polygamous relationship?” asked Graham.

“Um, let’s see,” Coney Barrett stammered. “That might be a question that could be litigated at, you know, polygamy obviously in many places is illegal, now, but that could be an issue somebody might litigate before the Court at some point.”

“Somebody might have made the argument it’s possible for three people to love each other, genuinely, and that would work this way with court if somebody wanted to make that argument, is that correct?” Graham further questioned.

“Somebody could make that argument,” Coney Barrett agreed.

The insinuation between the two appears to set up Obergefell v. Hodges as a dangerous precedent that could lead to polygamy–a tired and ridiculous argument that Republicans have used to resist marriage equality and shame LGBTQ people for decades. The conversation also sets up a certain urgency: Graham’s worries about group marriage signal a need to overturn Obergefell v. Hodges to prevent polyamory from becoming a reality in the US. Even scarier, Coney Barrett appeared to agree.

Earlier in her confirmation hearings, Coney Barrett refused to answer questions regarding her views on marriage equality. It appears Graham found a roundabout way to do it.

Can't believe we have to say this but we'd like to remind everyone that marriage equality ? polygamy.#SCOTUSHearings pic.twitter.com/f5kO34GCv0