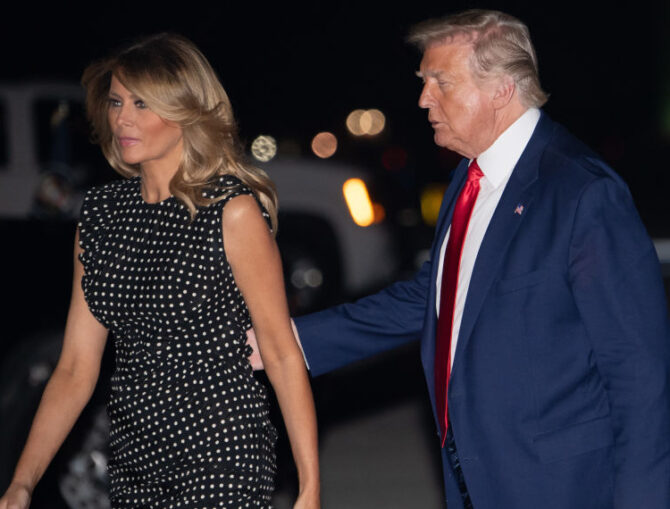 We haven’t heard a peep from Melania Trump since FBI agents searched Mar-a-Lago on August 8. Now, insiders say the ex-FLOTUS was bothered by the whole thing, but not enough to feel the need to make a public statement about it.

“She’s private, and she’s protective of her son and her home,” the source says. Another adds, “She cared, but not like he cared.”

Mr. Trump, of course, was livid by the whole thing, firing off a statement on Truth Social that read: “Just learned that agents went through the First Lady’s closets and rummaged through her clothing and personal items. Surprisingly, left area in a relative mess. Wow!”

FBI agents reportedly went through Melania’s bedroom, closets, and bathroom. The search warrant listed what areas they were allowed to enter, which included any spaces the ex-president, or FPOTUS as he’s referred to in the court documents, regularly frequents.

Though the Trumps maintain separate bedrooms, three people familiar with the layout of their 3,500 apartment at Mar-a-Lago tell CNN that Melania’s bedroom and closets are just down the hall from her husband’s bedroom and home office.

The likelihood of Trump hiding anything in his wife’s quarters, however, seems low, according to those who know the couple.

“She would never allow him to keep his stuff in her room,” a source tells CNN, “and he would, frankly, never ask.”

Another adds, “She has always considered what Donald does to be separate from her. Decisions he makes about his business are his decisions, not hers.”

Since the search, the only public statements Melania has made have been to promote NFTs for some company called USA Memorabilia on Twitter, which a former Trump adviser notes to CNN is “weird.”

“It’s weird,” the person says. “To be so blatant about making money from USA-themed collectibles.”

USA Memorabilia bills itself as “the premiere NFT platform featuring United States memorabilia.” It’s unclear who runs the operation, but the only two accounts it follows on Twitter are Melania’s personal account and her “official” office account. 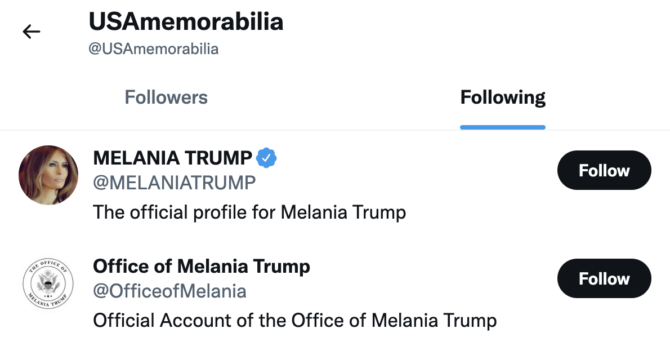 Why the ex-FLOTUS seems to be devoting all her attention to this NFT thing is anyone’s guess, but it could be an exit strategy.

“I would imagine as the wife and mother of his child, she must be worried (about the future),” another source close to the Trumps tells CNN. “She might at least be a little worried about how her own life will change.”

Apparently, Melania Trump is “annoyed” that the FBI searched her bedroom, but has no opinion of the fact that her husband is under federal investigation for stealing and storing national security secrets.
Yep. That tracks.

“Annoyed” seems to be her calling card. Anyways. Be best. https://t.co/l5xiDpzUmz

I find it weird that Melania would be annoyed that her personal belongings were searched when the entire planet has seen her naked.
Keepin it classy…
Trump classy, that is.

why did they search her bedroom when we all know he never goes in there?

Melania Trump is not speaking out about how Trump stole classified documents. She is upset because they searched her bedroom. Really? I REALLY DON’T CARE if she is upset about that.

I just got a news alert that Melania Trump is annoyed pic.twitter.com/3inTIKE4zH

I’m annoyed that in the four years she was first lady, she accomplished nothing except destroy the rose garden.

Aaaaand Melania Trump is focused on historical, patriotic, US memorabilia to sell. 🙄 pic.twitter.com/0NOqa3ljG0

While his wife stays focused on the NFT thing, Trump is battling it out with the DOJ in court. Last Friday, his lawyers requested a federal judge appoint a “special master” to the case and prevent the Justice Department from continuing to sift through the dozens of boxes of seized from Mar-a-Lago.

U.S. District Court Judge Aileen Cannon, who was nominated by the ex-president and confirmed by the Senate in late 2020, indicated she might grant the request. A hearing on the matter is scheduled for Thursday.

Related: Lindsey Graham says Trump can’t be prosecuted or–hot damn!–there might be “riots in the streets!”